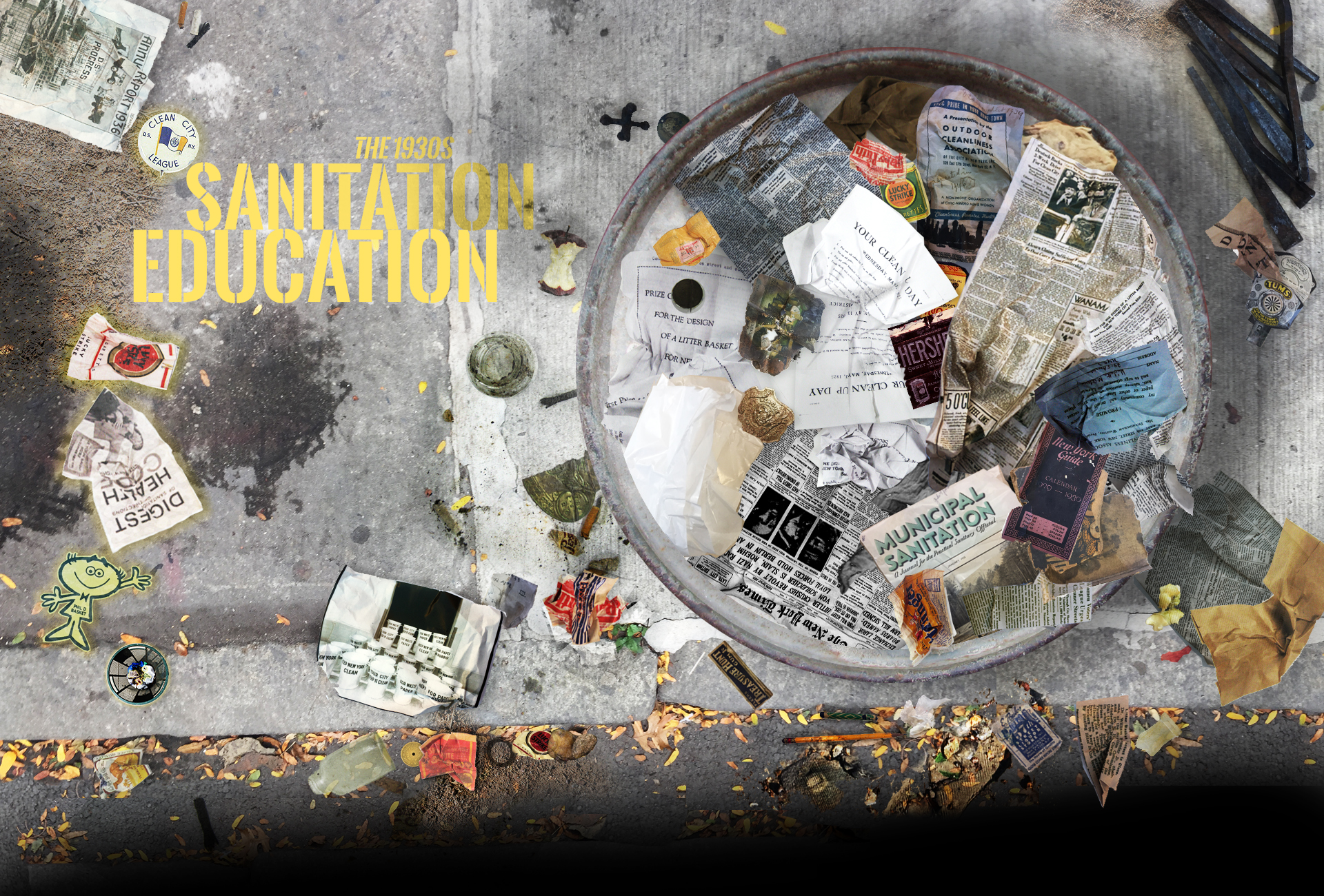 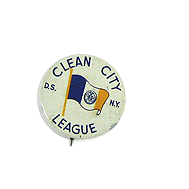 This pin has an image of the Department of Sanitation Seal. Thousands of school children were a part of the Clean City League, organized through DSNY's Sanitation Education initiatives. Wearing the pin signaled the child had signed a pledge, read sanitation material, listened to lectures, and competed to write the best song about cleaning sidewalks.1Department of Sanitation: Clean City Leagues. Box #15, Folder #297. LaGuardia and Wagner Archives. Queens, New York. 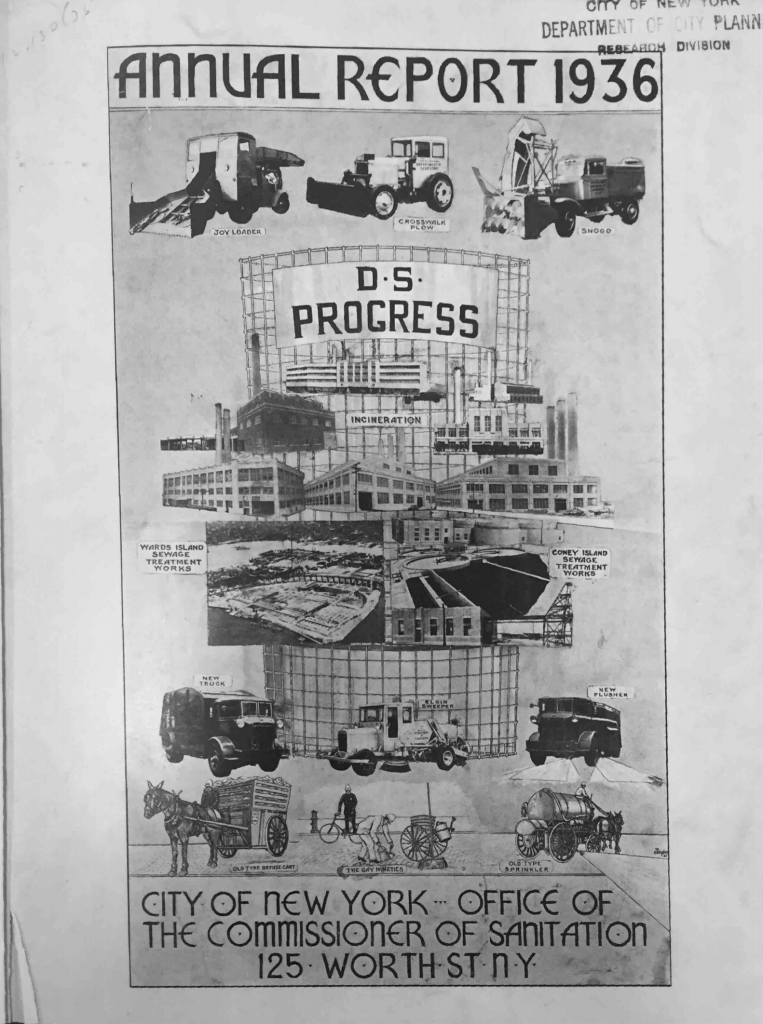 The Annual Report of 1936 proudly displayed of all of the Department of Sanitation's technological accomplishments. The contents included methods of collection, personnel changes, statistics, budgets, and much more:
"The Department has purchased additional wire baskets and we now have on the streets approximately 7040. They are practical and are educating to the general public, who are gradually becoming 'litter conscious.' "2Department of Sanitation, City of New York. Annual Report, 1936. (NYC Municipal Archives Library, New York City), 32. 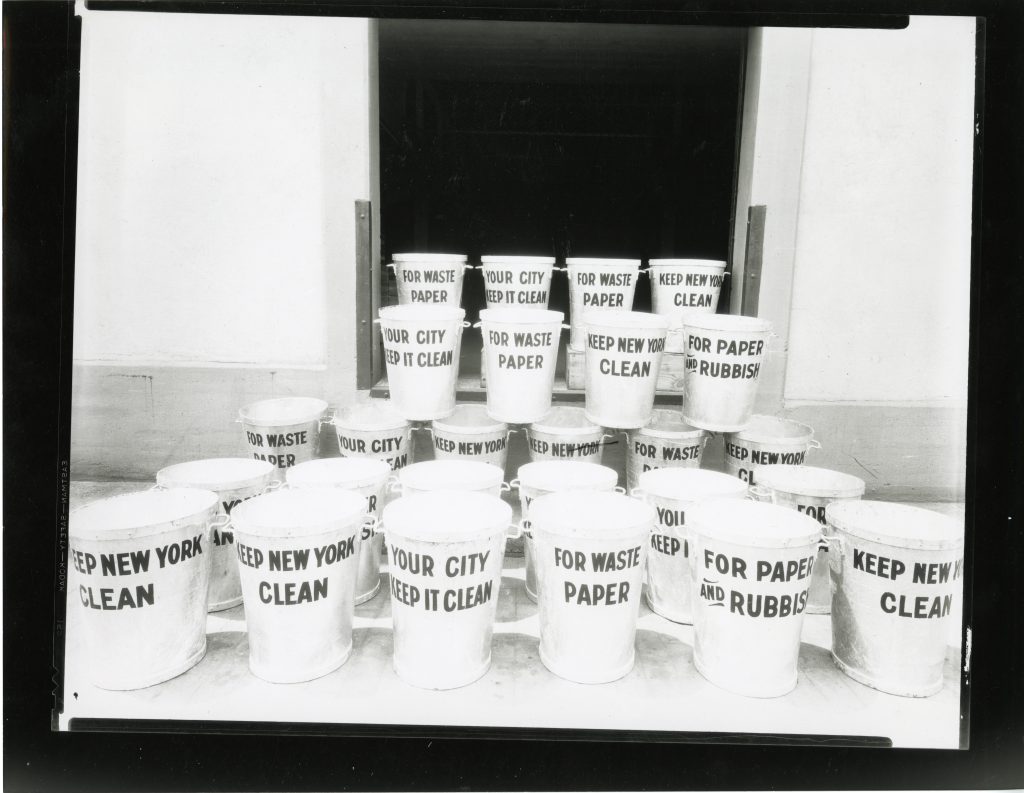 Design of the litter baskets had yet to be formalized before 1934. Once they were, the Department of Sanitation maintained that they should not be covered in distracting advertising, but directly state the materials they were supposed to contain, sorting material (paper and fruit skins, for example) for collection.
The official, standardized litter baskets were all painted white, and only used English labels.

YOUR CLEAN UP DAY 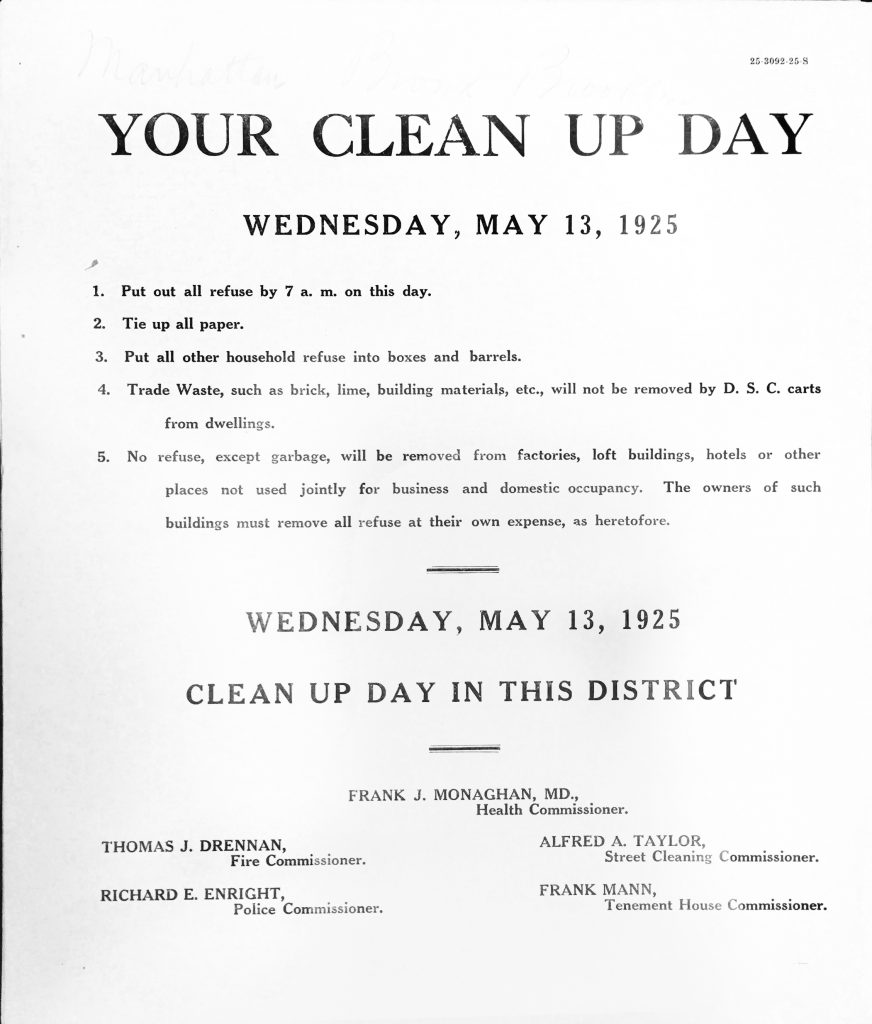 Even before the creation of the Department of Sanitation was formed, efforts to clean the city emerged from other municipal areas. The Department of Health and the Department of Parks often tried to push clean up initiatives, such as Clean Up Days. The city was divided into a total of 51 sections, and each section was to clean up on a specific day. These flyers were passed out, amounting to about 150,000 total flyers notifying residents to clean up their city. 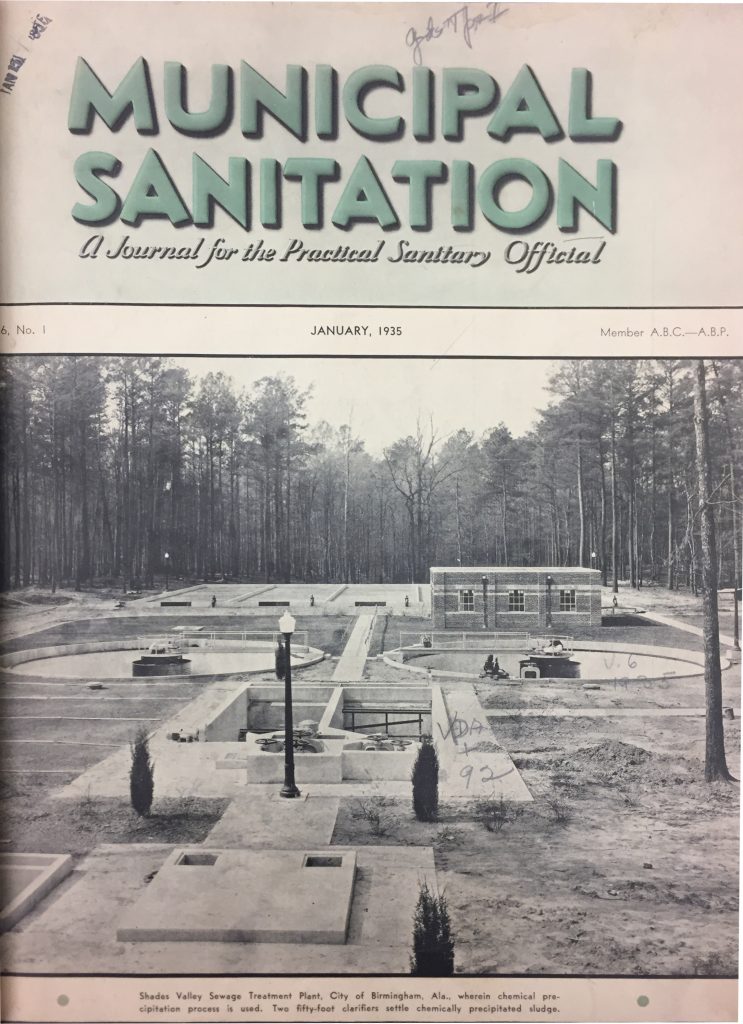 Published from 1930-1940, Municipal Sanitation: A Journal for the Practical Sanitary Official, began with posing a problem:
is sanitation a public or private responsibility?

Litter was specifically targeted as an important problem.
The following page from the magazine diagrams the issue: 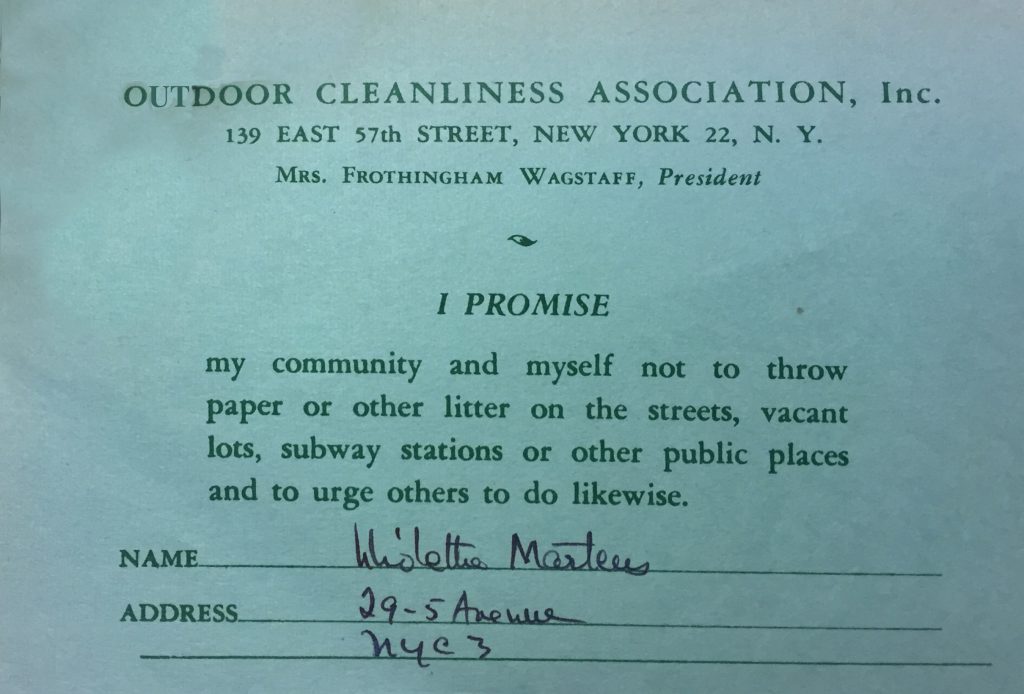 While pledges were used throughout Sanitation Education, they were used for adults as well. The OCA educated adults when they had the chance with cards such as this one.

This distribution of cards was not a new strategy: The Outdoor Cleanliness Association passed out to thousands of this pamphlet, "Civic Pride in Your Hometown," to thousands of school children over three decades. Principals would write to the OCA for one copy for each of their students.

Click on a page below to read the whole pamphlet. 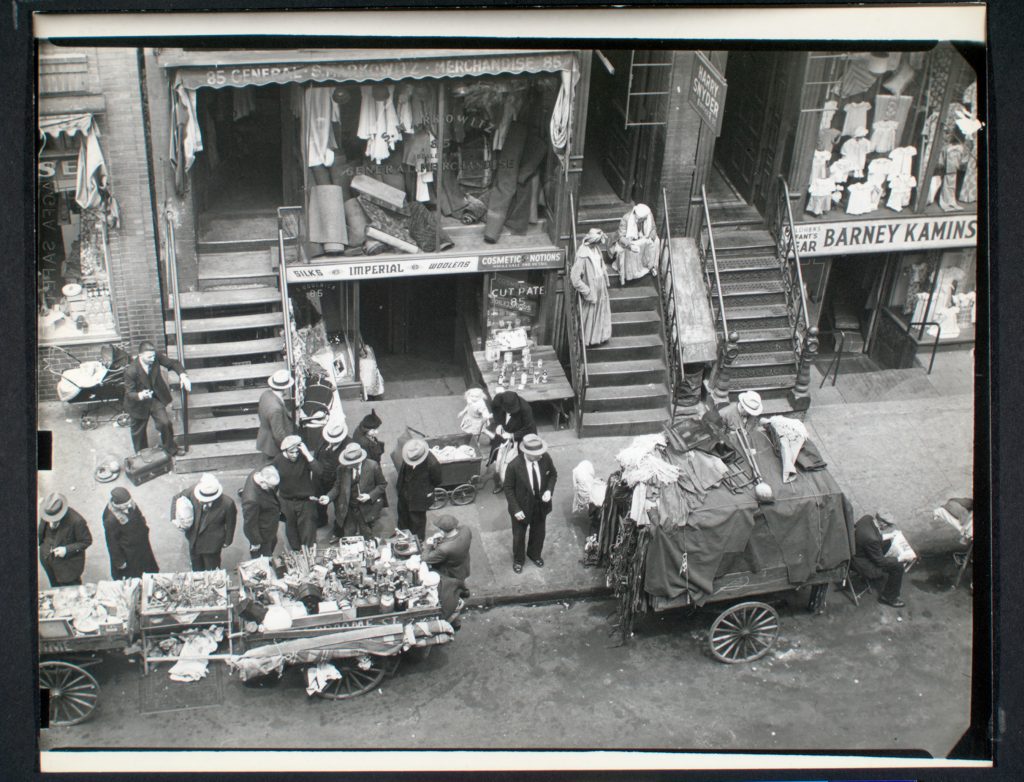 New York City took on its nickname The Big Apple around the 1930s. Apples were quite common on the streets of the city, often sold as for 5 cents as a form of employment during the Great Depression. 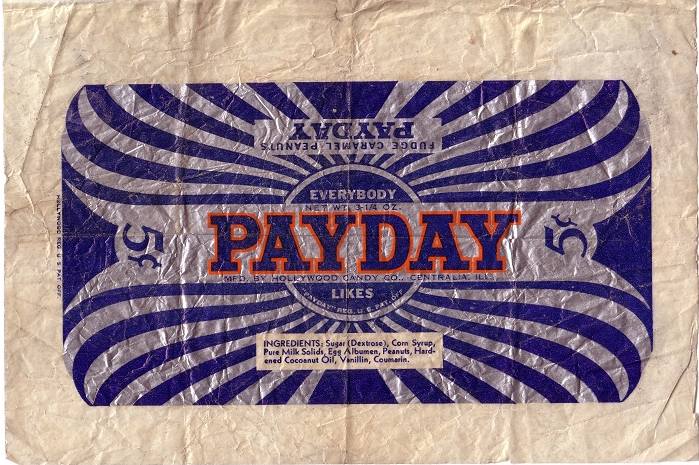 Sanitation Education heavily targeted candy wrappers, using them frequently as examples of placing something where it is not supposed to go. The number of times candy wrappers were cited creates an image of the streets in the 1930s completely papered with them, though that generally was not the case.

Contest for the Design of a Litter Basket

The New York Academy of Health's Committee of Twenty on Street and Outdoor Cleanliness sponsored a contest to design litter baskets that were "substantial, neat and attractive in appearance" for the newly formed Department of Sanitation. Click to open a PDF of the contest rules and requirements.

The winners, both submitted by art school students, resembled European designs. Indeed, the Committee of Twenty felt that European cities were the ideal model for creating a clean city.
Dr. George Soper, holding a PhD in sanitation engineering, was sent across seas by theCommittee of Twenty on Street and Outdoor Cleanliness to observe and report upon European practices to make NYC a “cleaner and far more attractive city.” Soper’s travels noted the types of street cleaning devices and methods, and were published in Street Cleaning and Refuse Collection and Disposal in European Cities with Suggestions Applicable to New York in 1929. 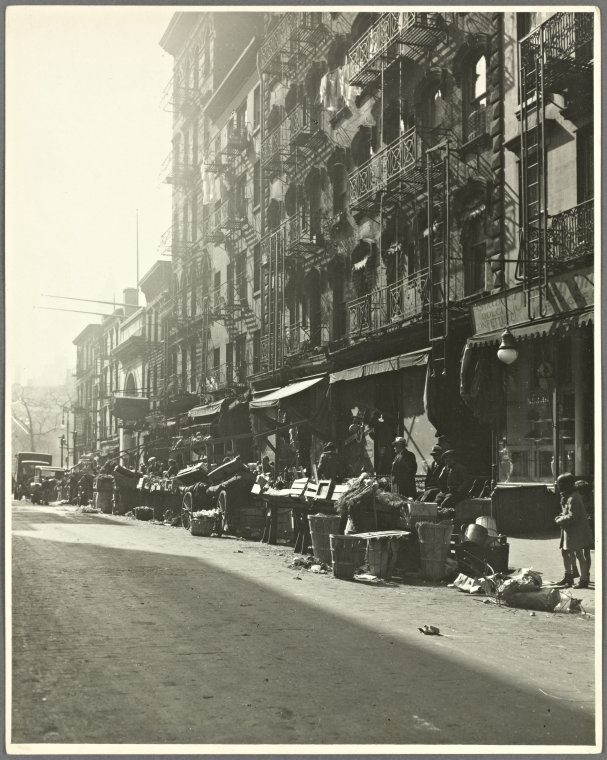 Before the official installment of municipal litter baskets, old oil barrels and reinforced wooden barrels were used for collecting trash, especially in places that had more frequent activity, like open air markets.

This litter basket was reimagined by Jaime Ding. 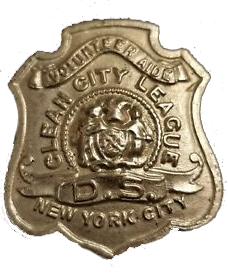 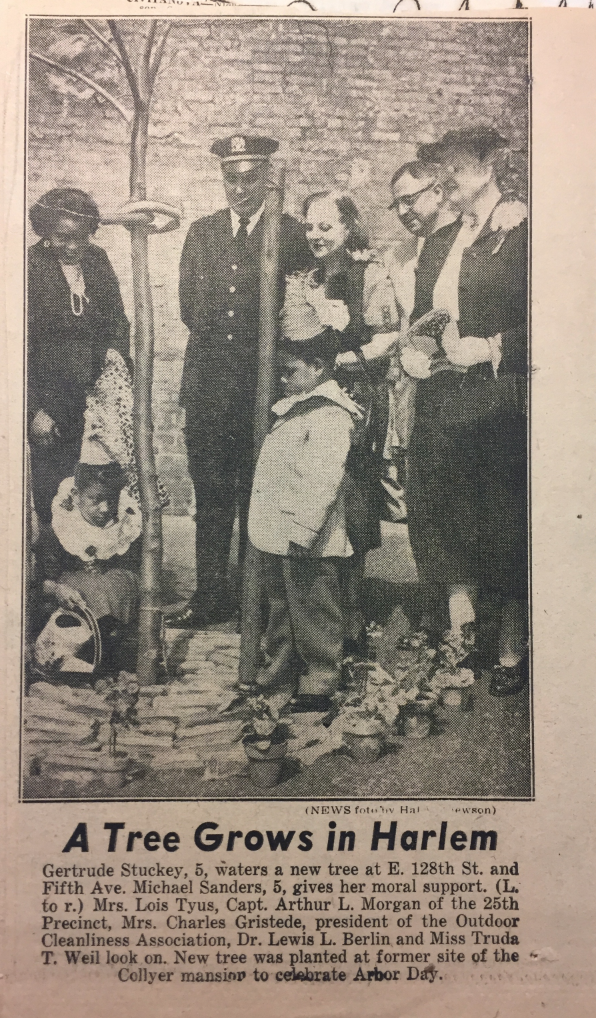 Sanitation Education heavily targeted candy wrappers, frequently  using them as examples of placing something where it is not supposed to go. The number of times candy wrappers were cited creates an image of the streets in the 1930s completely papered with them, though that generally was not the case. 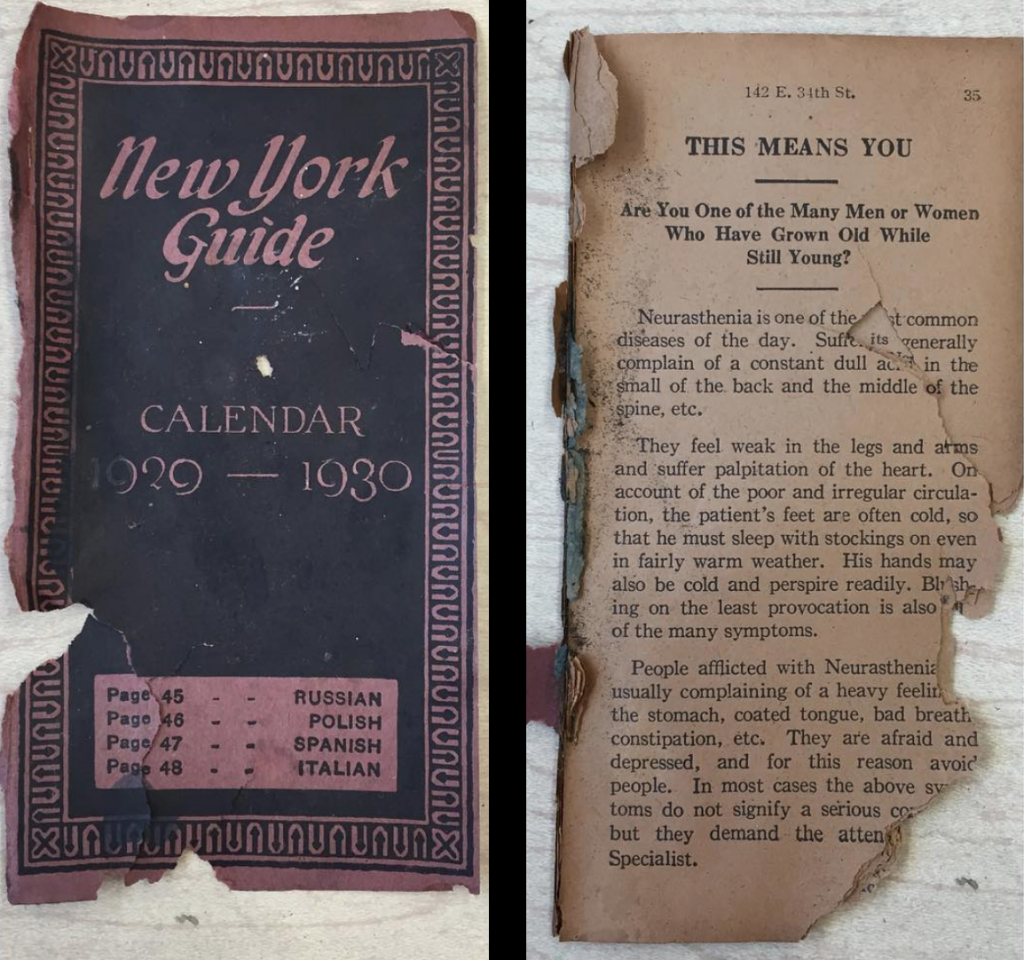 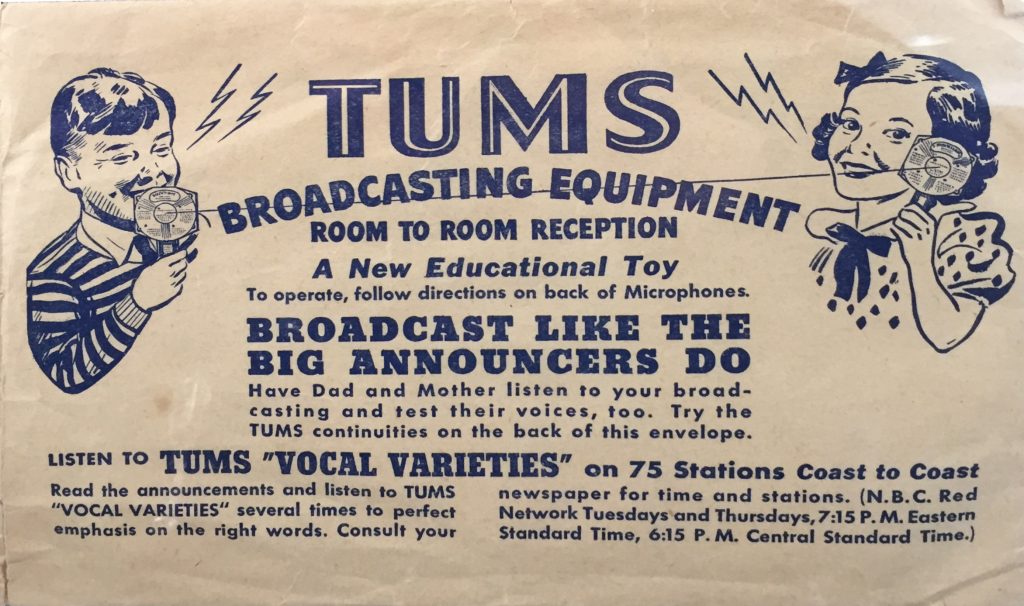 This TUMS advertisement from the 1930s uses an "educational toy" to spread the word. Advertising had targeted children since the late 19th century, and contributed to the idea of "molding" children - a different kind of education in the world outside of school walls.

SSanitation Education heavily targeted candy wrappers, using them as examples of placing something where it is not supposed to go. The number of times candy wrappers were cited creates an image of the streets in the 1930s completely papered with them, though that generally was not the case. 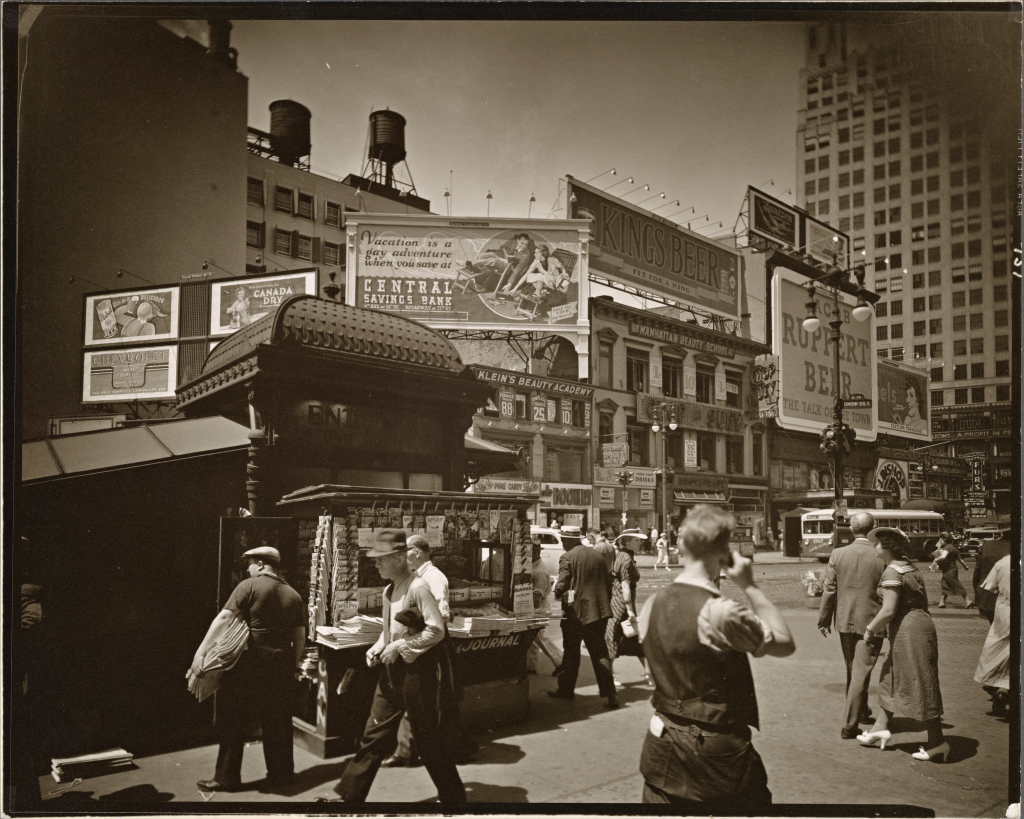 As New York City grew, the number of people, the availability of consumable items, and the methods of transportation grew as well. When the New York MTA opened, litter on the tracks became a serious concern. DON'T was a pamphlet passed out by the New York Academy of Medicine's Committee of Twenty on Outdoor and Street Cleanliness, a committee formed in the late 1920s to push for sanitation reform to promote healthy practices. The list of members on the back included wealthy academics and doctors such as H. Boardman Spalding, who also served on the Board at the Metropolitan Museum of Art, and Bernard Sachs, a neurosurgeon of the Goldman Sachs family. They took it upon themselves to educate the public as they saw fit, including this card, passed out to women in selected neighborhoods:

Click on the pages below to view the full Sanitary Code, with regulations about "Garbage and Swill," "Transportation of Manure," and "Butchers' Refuse and Bones." 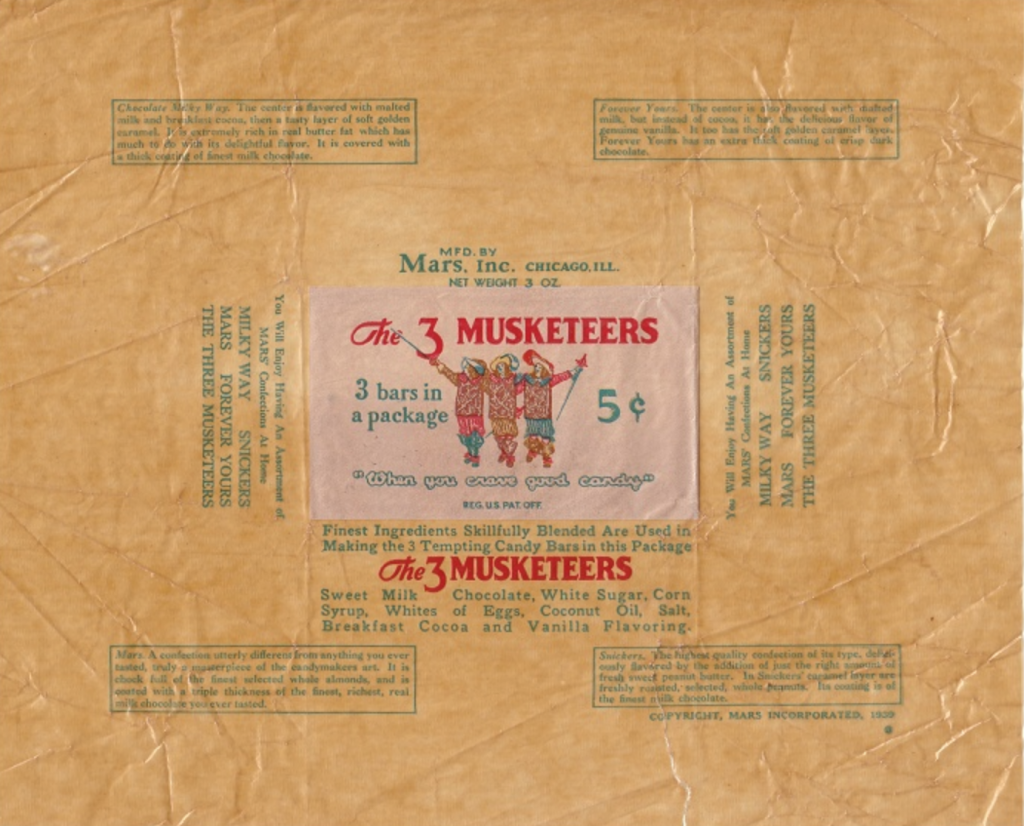 Sanitation Education heavily targeted candy wrappers, using them as examples of placing something where it is not supposed to go. The number of times candy wrappers were cited creates an image of the streets in the 1930s completely papered with them, though that generally was not the case. 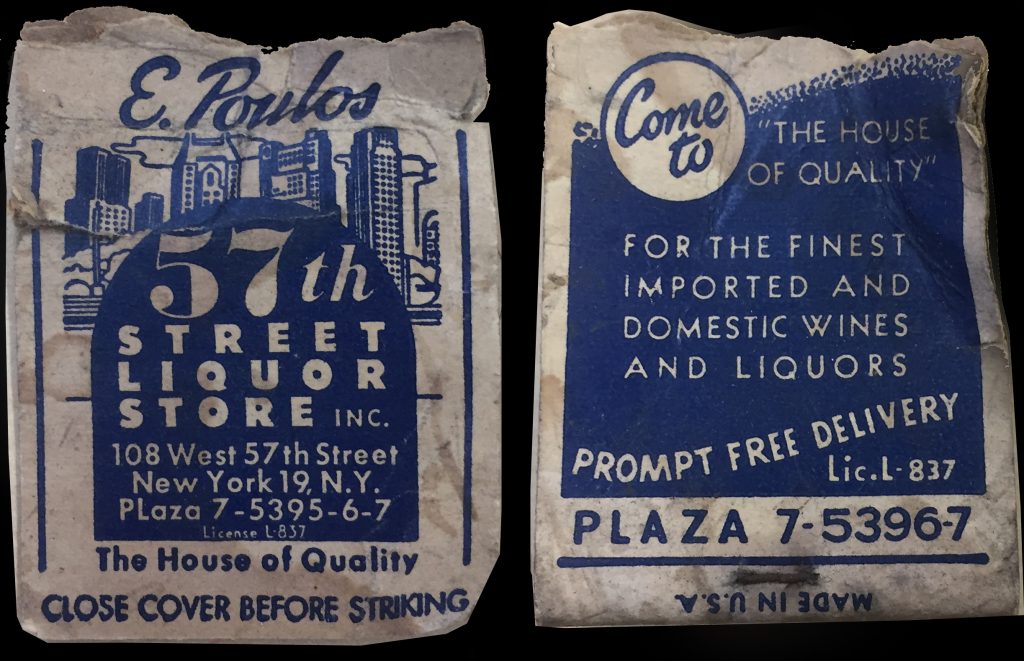 In 1937, the federal government official prohibited dumping waste into the ocean, emphasis on burning unwanted materials stronger. Incinerators were a common sight in both residential buildings and businesses.