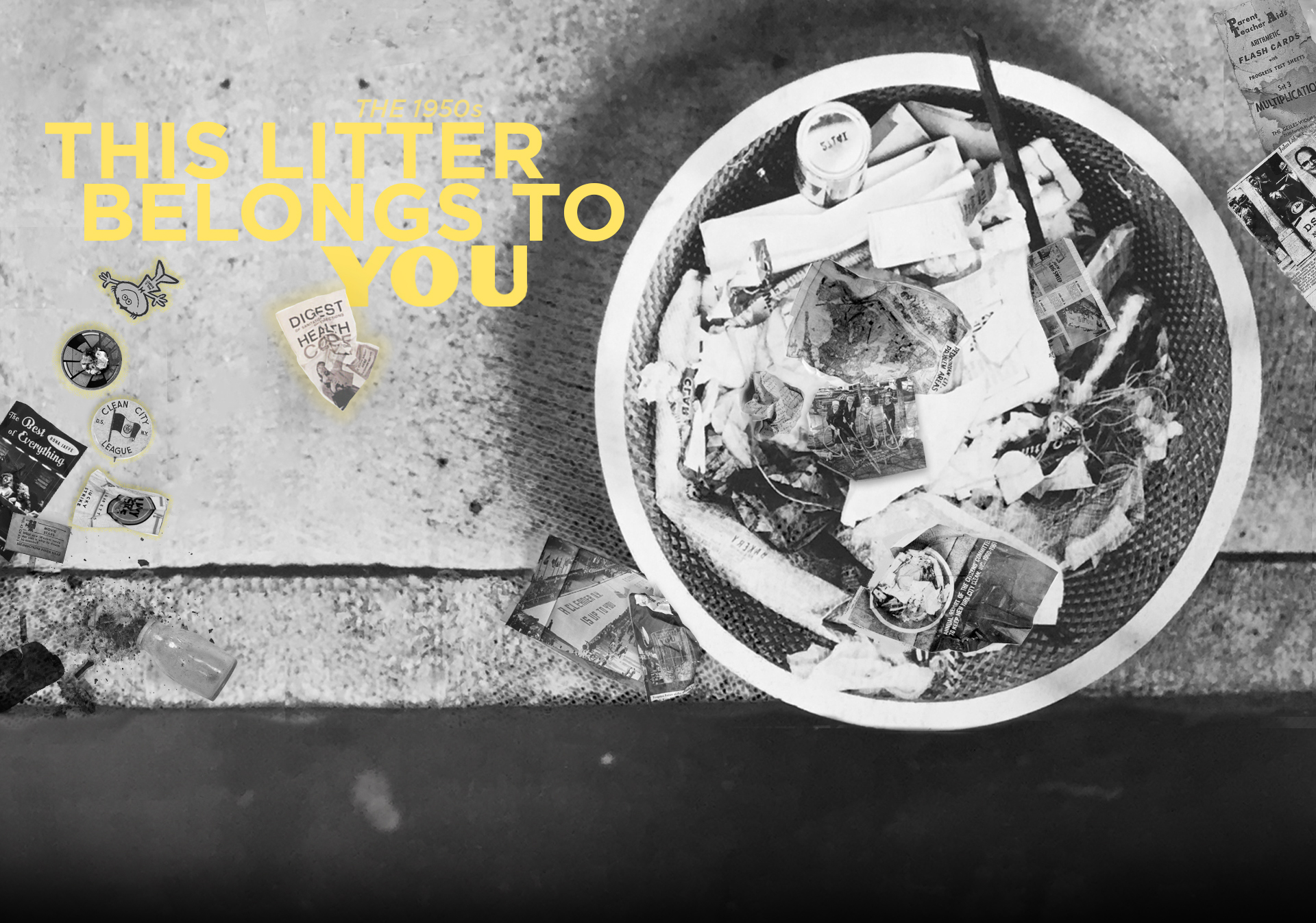 This pamphlet was handed out at the end of the 1950s as a part of the J. Walter Thompson agency's campaign, "Cast your Voice Here for A Cleaner New York." The image became plastered over signs, circulars, and trucks. The CCKNYCC cited it was voted the "best public service poster in the U.S."

In their correspondence in planning the campaign, J. Walter Thompson specifically targeted "problem" areas to strategize where to hand out the most pamphlets. Such problem areas were never specifically pointed out, though they referenced such areas as places where other languages were spoken.1Letter from William McKamy to Mr Chris Gilson, May 23 1960.  Box 7, Howard Henderson Papers. John W. Hartman Center for Sales, Advertising and Marketing History. David M. Rubenstein Rare Book and Manuscript Library. Duke University, Durham, North Carolina.

On the back, the pamphlet lists litter as "Public Enemies." Click on the excerpt to see the whole booklet: Find the stick in the can for more information on Big Sweeps.

Source: "The Big Sweep, 1957." The Department of Sanitation, the City of New York. Municipal Archives of New York City. 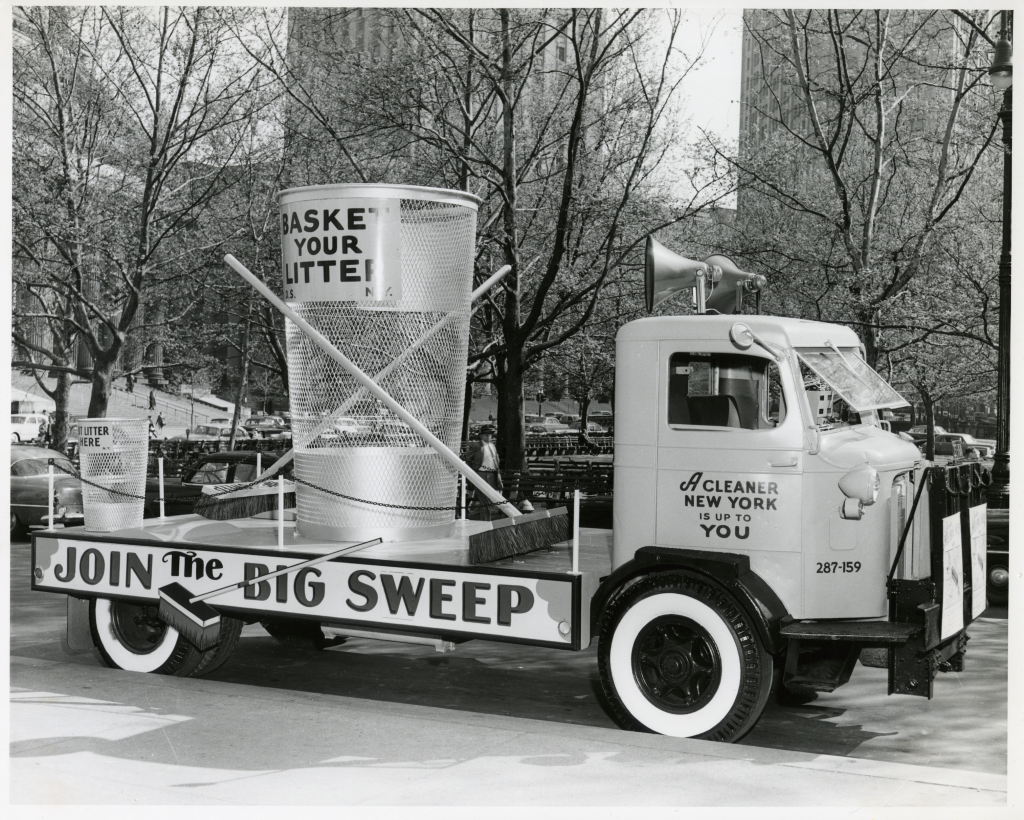 The litter basket stood as an important visible signal to attract attention, clearly demonstrated through 30-foot-tall cans such as this one. As campaigns took off, these large markers became icons set in pedestrian heavy areas to remind people that litter baskets were available for use.

The Citizens Committee to Keep New York City Clean began publishing their Annual Reports not only for current members but potential members. Formed in 1955, CCKNYCC carefully designed their annual reports using images of neatly contained trash. Inside, stylish graphs and happy demonstrators showed measures of success, effectively self-congratulating readers on a job well done without getting dirty themselves.

This recreation of a litter basket in the 1950s is based off of this clean image. First placed in the middle of Times Square, Lively Louie was hooked up to an intercom system, and Sanitation men hid around nearby corners and called out to passerbys to not throw litter on the street. Lively Louie became so popular that he was placed in every borough. The stunt was another attempt by Young & Rubicam to draw attention to litter baskets.

Eventually, Louie traveled to other parts of the country, as evidenced by this basket in Greenville, North Carolina: 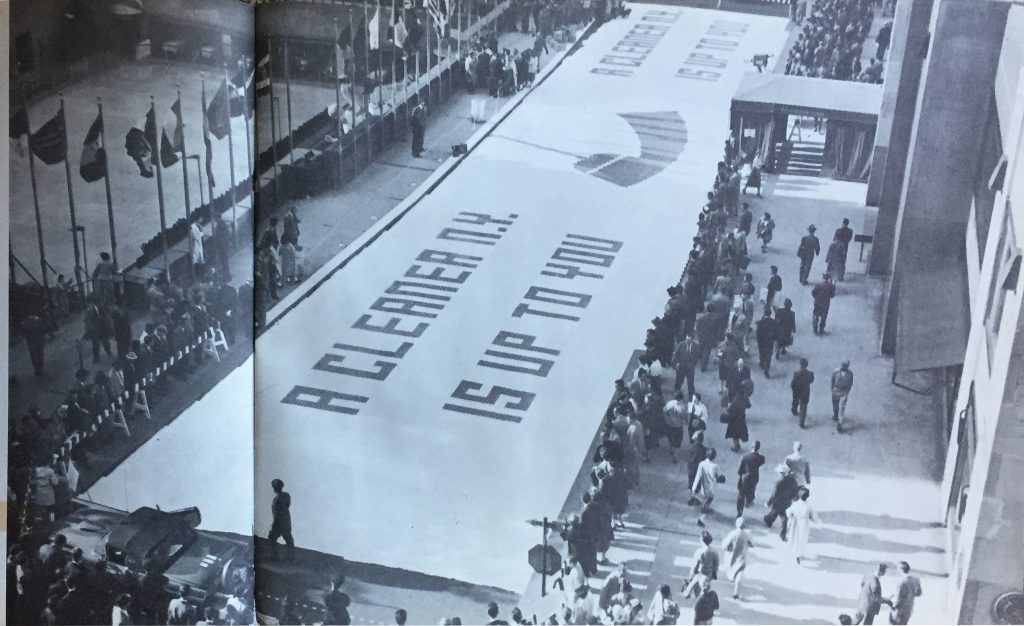 In October, 1956, 108,000 bars of soap, donated by a large soap manufacturer, covered the block in front of Rockefeller Center.

CCKNYCC saw the spectacle as a celebration to begin the second year of their mission to create the "cleanest big city in all the world." The attention-grabbing event allegedly helped boost the city's cleanliness rating from 56% in 1955 to 69% at the end of 1956.

This Litter Belongs to You

Click on the pages below to learn more about the "World's Biggest House Cleaning Job." Advertising campaigns, a private contribution to a municipal department, was an extension of the school campaigns that had been happening for years in Sanitation Education. Many of the advertising agencies (all working pro bono) believed that their influence on children's personal cleanliness was the watershed moment in changing how the city looked. Howard Henderson, the president of J. Walter Thompson, believed children were to be an advertising 'medium,' a gateway to communicating to parents of "troubled areas."2Letter to CCKNYCC on May 23, 1960 from William McKamy, Vice President of JWT. Special Projects Series, Box 7. Howard Henderson Papers. John W. Hartman Center for Sales, Advertising and Marketing History. David M. Rubenstein Rare Book and Manuscript Library. Duke University, Durham, North Carolina.However, the publicity of the campaigns was prioritized over in-classroom education with emphasis on visibility of the issue beyond classroom walls. The litter basket became an icon. For JWT, this was logical as a "democratic campaign" for the consumer for 3 reasons: 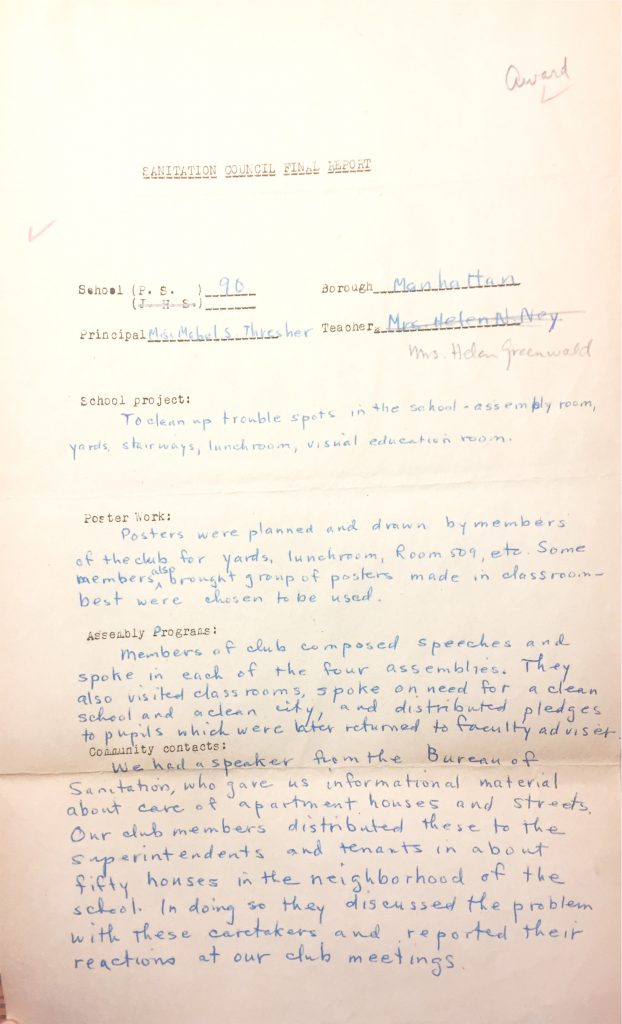 P.S. 90 on 225 W. 147th Street in Manhattan, along with P.S. #35 on Decatur Street and Lewis Avenue in Brooklyn, won the award for being the Most Outstanding Cleanliness school for the 1946-1947 school year. The following year, the Outdoor Cleanliness Association announced the winners over the radio station 710 WOR in September. The winner was chosen on the basis of having "outstanding clean-up projects" and results. The prize was a banner presented to the school and its members of the Otis Youthbuilders club at a school assembly.3 Outdoor Cleanliness Association records, Manuscripts and Archives Division, The New York Public Library.

See an example of poster contest winners from PS 92 in the 1950s below: As children were seen as a strategy to influence parents, so many of the things children were to take home were also directed at their parents. Sanitation Education expected parents to aid their children, just like multiplication or reading. Compare the pledge above to the card stating the Sanitary Code below, both from the OCA. 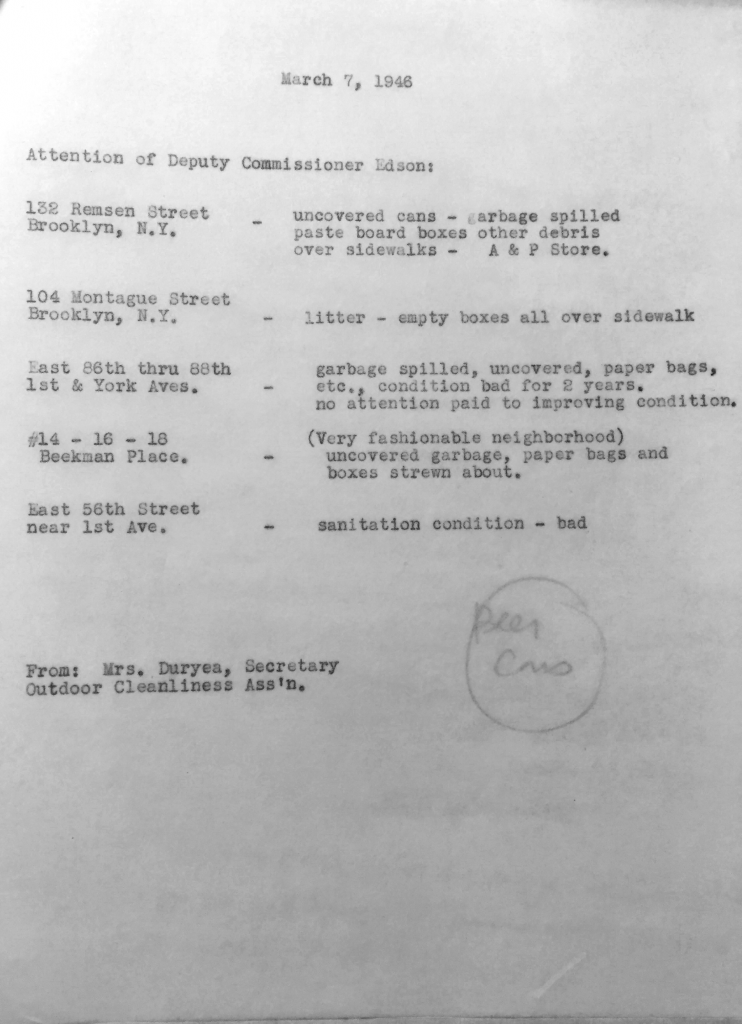 The OCA mailed cards to neighborhoods to survey residents about the cleanliness of their neighborhoods.The Outdoor Cleanliness Association collected complaints from select areas, and reported them to the Department of Sanitation. As the middleman, the OCA had the privilege of access to the municipal department and leveraged this position of power. Their close relationships with not only the Sanitation Commissioner, but also the Police, Health and Parks Commissioner, allowed them the privilege of access - an ease to simply send a letter about certain circumstances, expect and receive a reply.

Here, you can see a member of the OCA wrote "beer cans," on the list of the complaints. One complaint is from a "(Very fashionable neighborhood)"; another, "no attention paid to improving conditions."

For members of the Outdoor Cleanliness Association, improved conditions would be like this "Chalk Carpet of Color Contest" in 1956: Novels like The Best of Everything portrayed New York City as a bustling city, one where anyone could make their dreams come true. 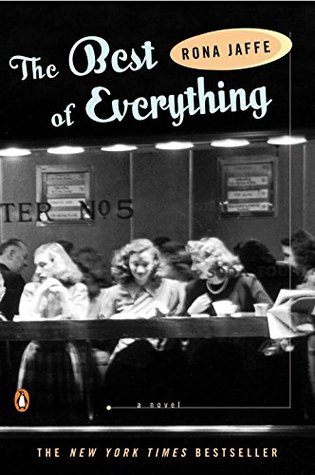 As a popular novel that soon became a movie, the story reveals not only the perspectives of five
20-something young women but also the things in the city and how they were treated in the city.

Like many other packaging materials in the 1950s, advertising campaigns for sanitation used celebrities and star power to popularize their campaigns. Local celebrities like TV legend Hugh Downs and Ed Sullivan, Mary Martin, Jackie Robinson, and Sam Levenson all were posed as "somebodies."  The celebrities showed "ordinary" people how to be successful people  - to not be a "nobody," but be a part of the "somebodies." 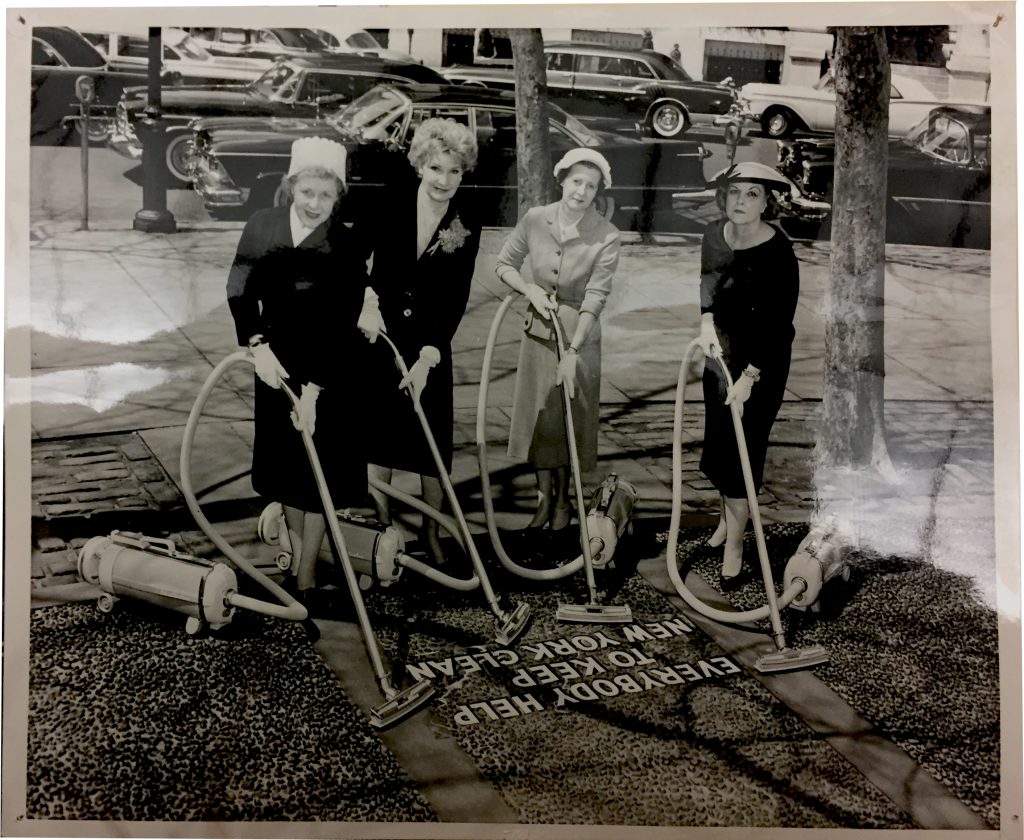 The Outdoor Cleanliness Association (OCA) followed many other female civic organizations in comparing the streets to spaces in their homes, stating street cleaning was a "municipal housekeeping" task. The OCA often sponsored clean-up demonstrations, usually with brooms. However, like many of their events, demonstrations served as a social event rather than one to clean up the city.

Other social events included the presentation of medals to members of the Department of Sanitation: 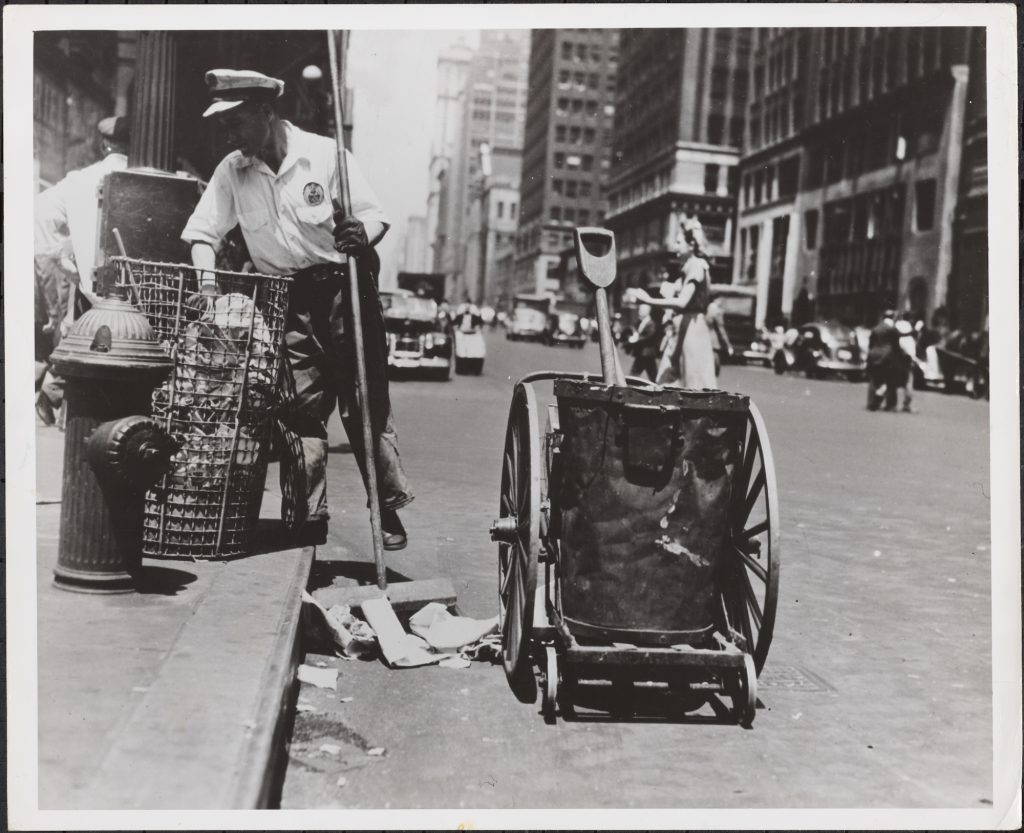 3,400 new litter baskets were ordered by the city in 1958, all with signs that advised people to "Put Litter Here." These litter baskets were white and supposed to attract attention. With the new additions, a total of 25,000 baskets were put "strategically" on the streets. The goal was to supply a basket for at least each 100 feet of curb.6"Public Trash Receptacles." Talk by Mr. Richard Fenton, Assistant to Director of Operations, 4th Annual Conference of the Keep America Beautiful National Advisory Council, November 14, 1957.

As advertising agencies promoted their own campaigns, the words on the litter baskets changed. Once J. Walter Thompson launched their campaign to "Cast Your Ballot Here," the litter baskets also reminded passersby to do so. Of course, the glamorous clean litter baskets did not reflect the actual labor of cleaning up the streets. 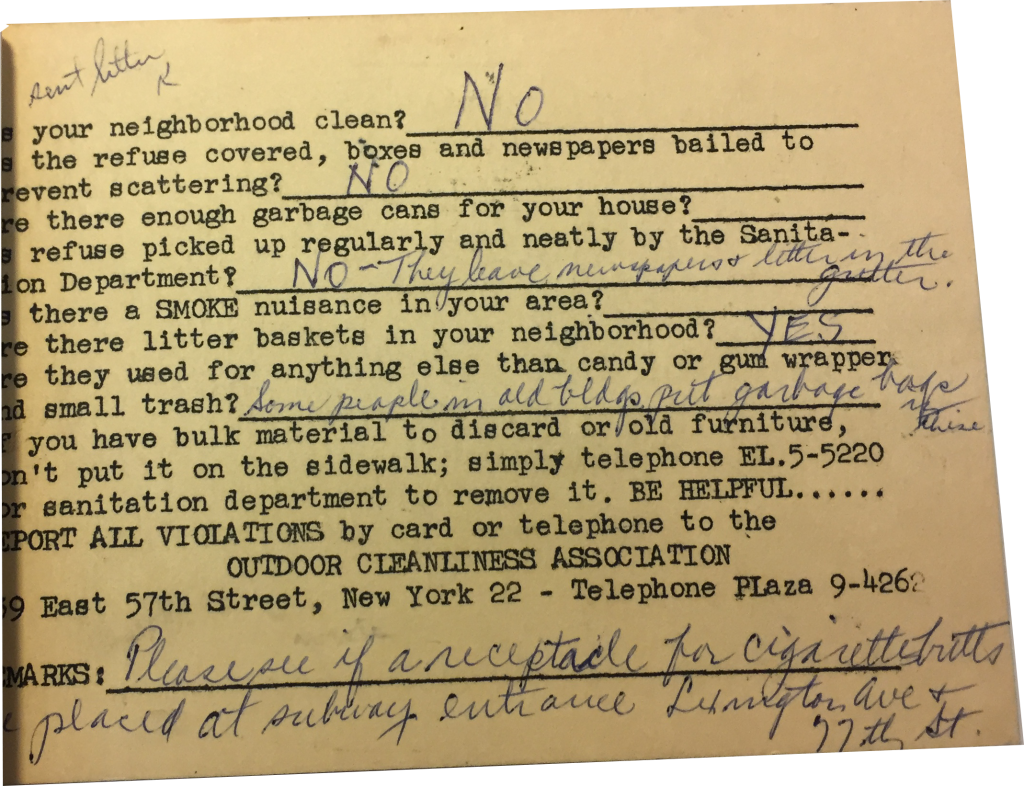 The Outdoor Cleanliness Association mailed cards to neighborhoods to survey residents about the cleanliness of their neighborhoods. They received responses like this one from concerned citizens and would write a letter to the Sanitation Commissioner. (Find the beer cans in the trash to see an example). As the middleman, the OCA had access to the municipal department and leveraged this position of power.