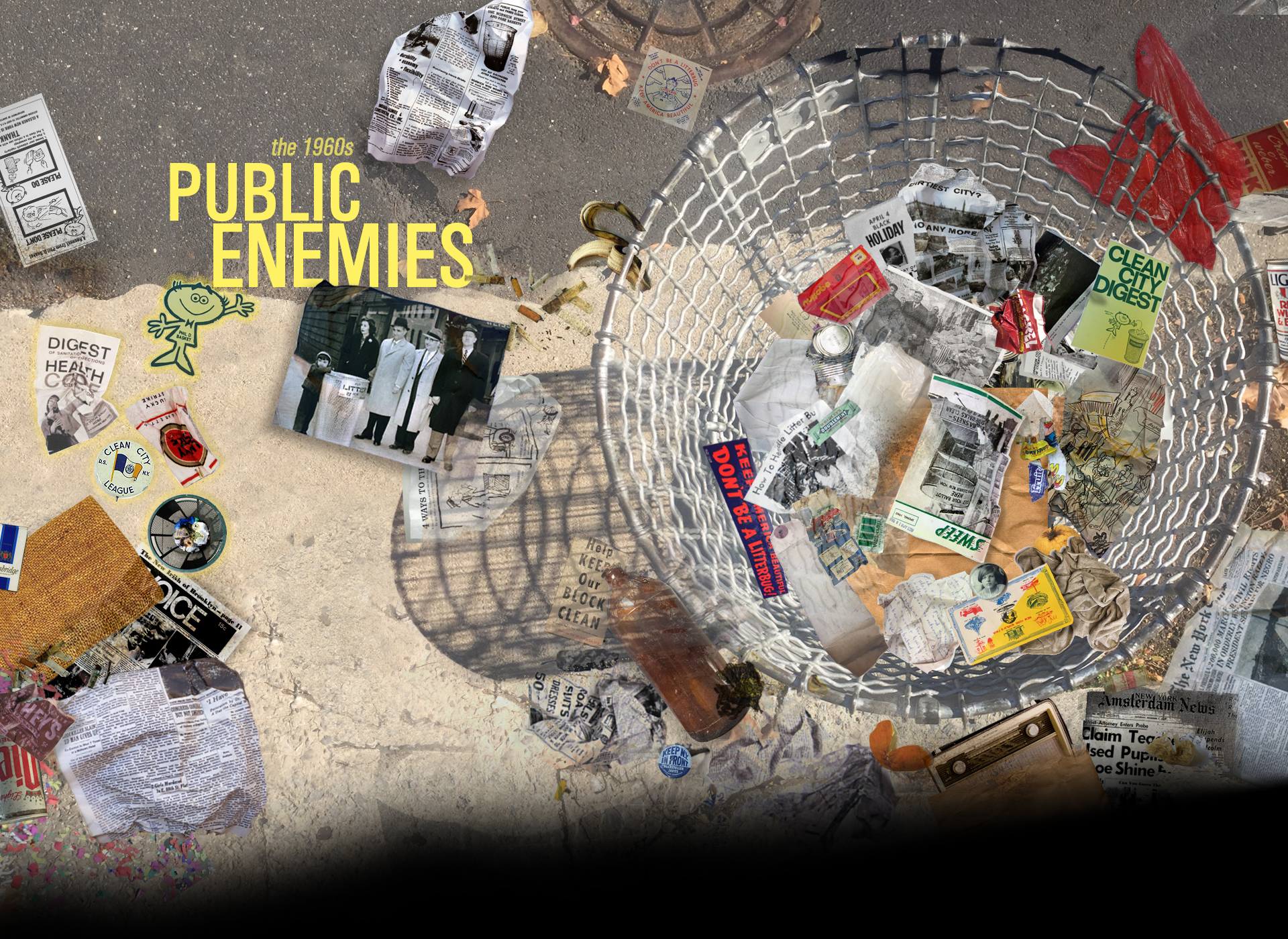 Litter Baskets in the Bronx 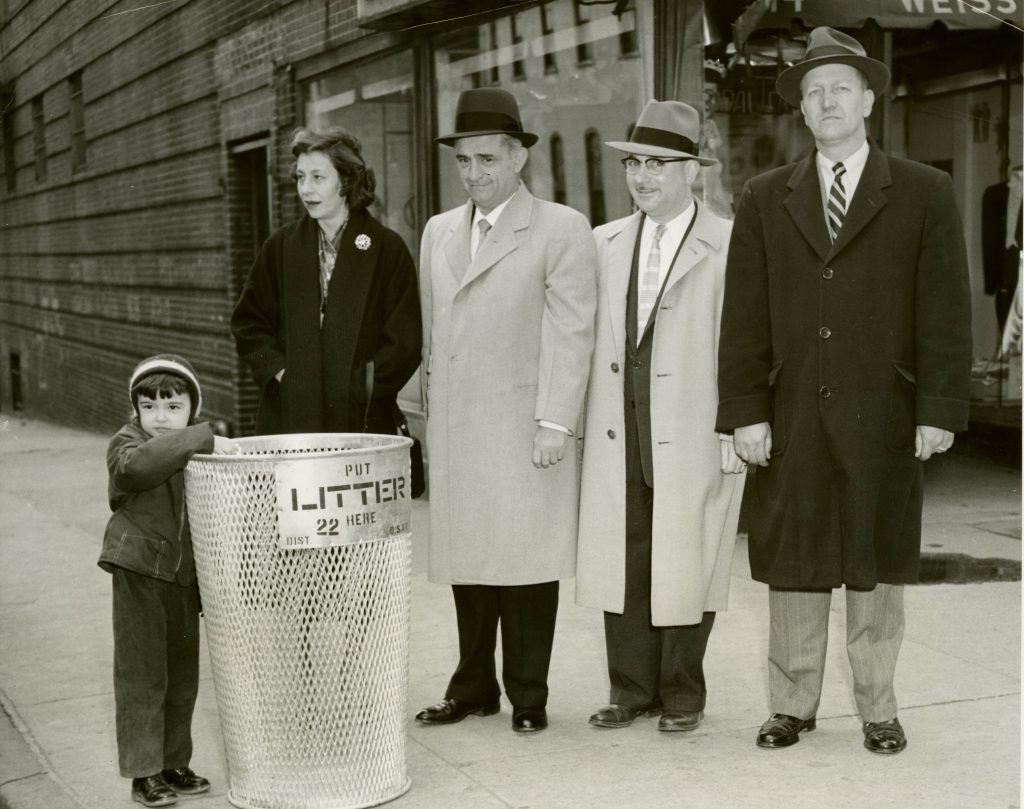 The 1960s brought advertising campaigns that emphasized punishment for litterbugs, the threat of $25 hanging over anyone who threw anything not in a basket (a dozen eggs at this time cost around 50 cents). The increase of policing and punishing litterers became the main strategy in managing city cleanliness. This card was distributed throughout New York City, and placed in newspapers and magazine ads.
It translated easily to radio and TV, encouraging efforts to clean up the city together.
Phil D. Basket, the brainchild of Batten, Barton, Durstine & Osborn (BBDO) debuted in 1964.

Meet Phil D. Basket (say it out loud!)
Phil replaced Charlie Dooley, the former bumbling representative who demonstrated how to use litter baskets. The average man who was "the SanMan's best friend" was replaced by the cute and active cartoon Phil D. Basket, the brainchild of Batten, Barton, Durstine & Osborn (BBDO) who debuted in 1964. 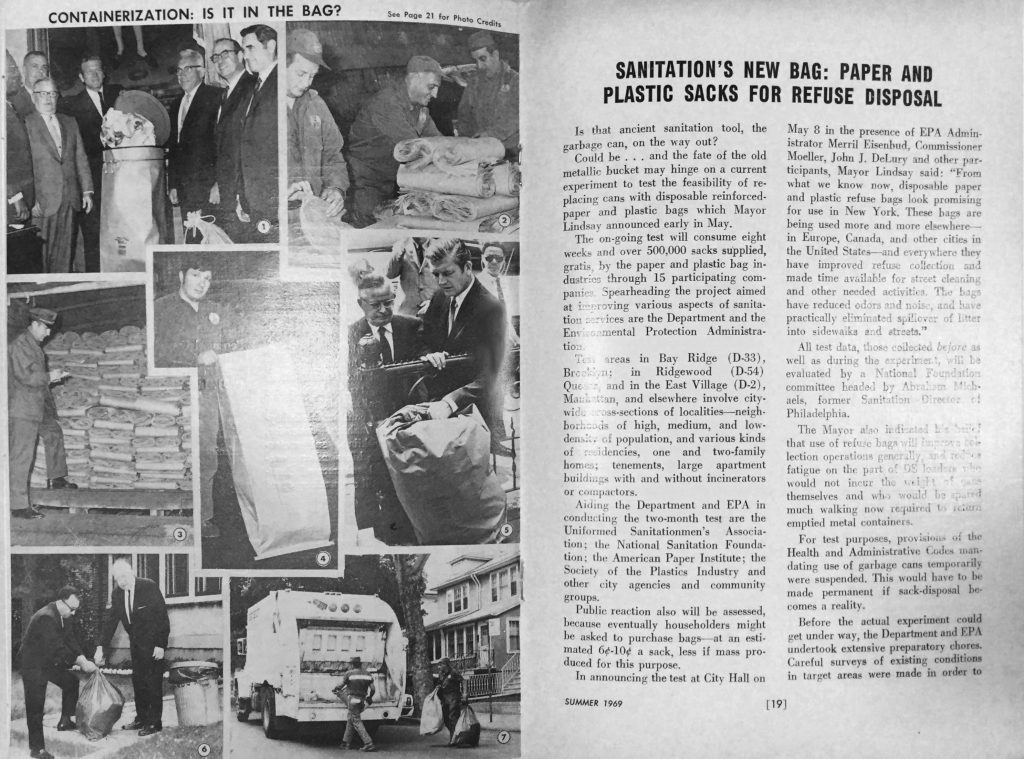 A new material, plastic changed the way sanitation was handled in the city. An Interagency Task Force on Disposable Refuse Containers was created in 1968, concluding that disposable containers would be "cleaner, quieter, quicker, and more convenient collections."1Correspondence from JVL to Mayor, Folder 1844, Box 99, Microfilm 45050, New York City Municipal Archives

The next steps were to determine what kind of bags would be optimal for the "total quality of the urban environment," whether it would be an addition to the metal cans, which company to use (most likely a member of the Society of the Plastic Industry), and where to implement these new materials. 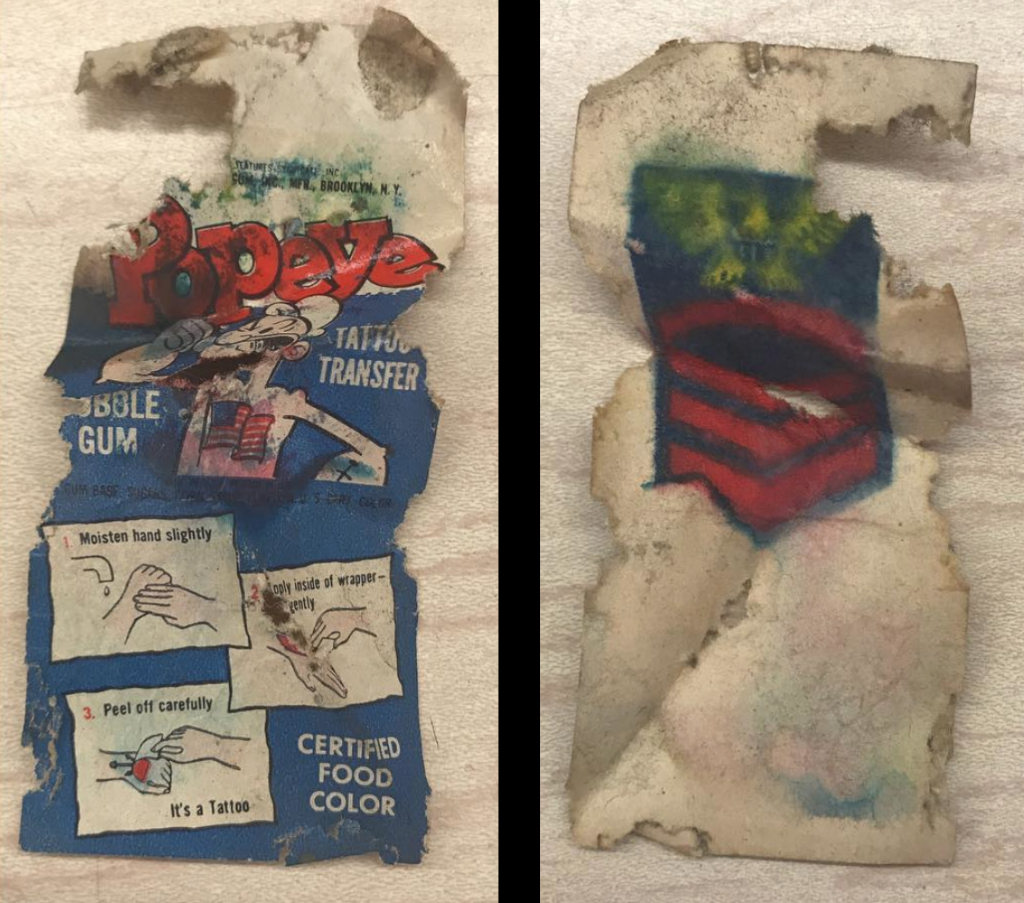 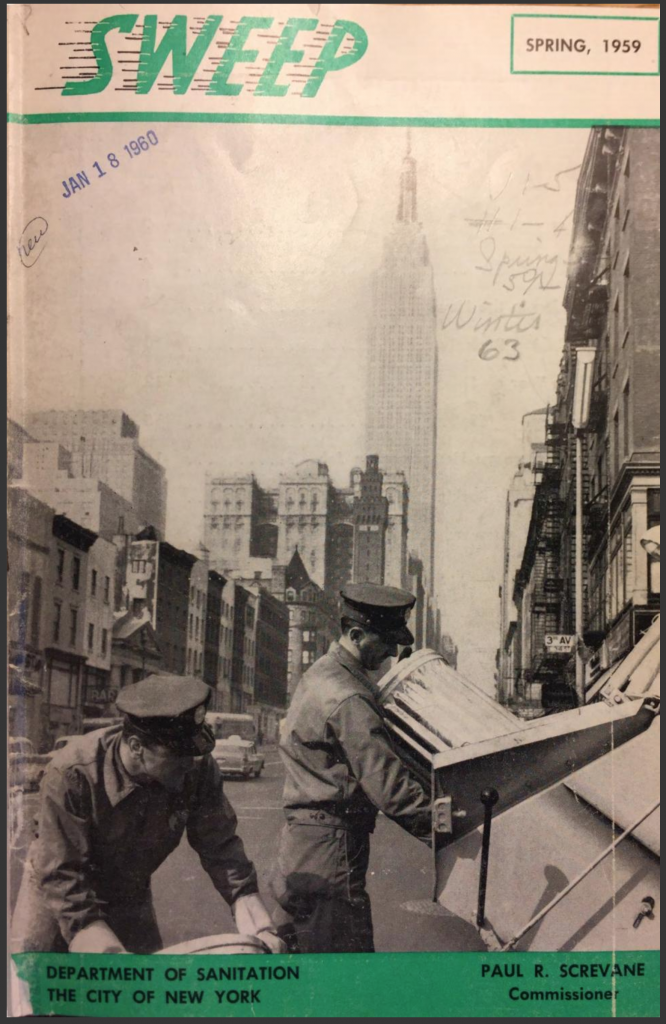 SWEEP served as the representative publication from the New York City Department of Sanitation. Distributed to not only DSNY members, but also to other cities, the tone of the magazine is optimistic.  Along with crossword puzzles, a classifieds section, and useful vehicular diagrams, many articles featured tips for both physical and mental health. 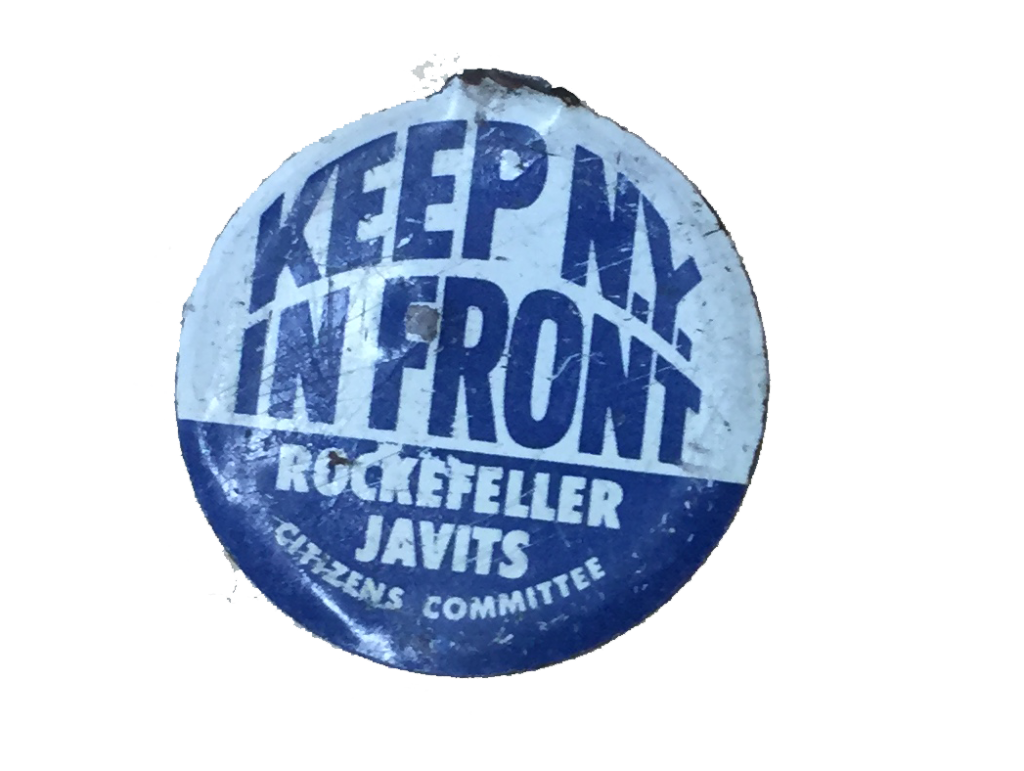 Pins were often used for campaigns and activist movements, and often fell off in the streets.

This particular pin supported Senator Jacob Koppel "Jack" Javits, and Governor Nelson A. Rockefeller in 1962.
It was sponsored by the "Citizens Committee," the same citizens committee that collected salvage materials during World War II.
Clearly, these citizen groups held remarkable power over how the city was run through sponsoring political parties. 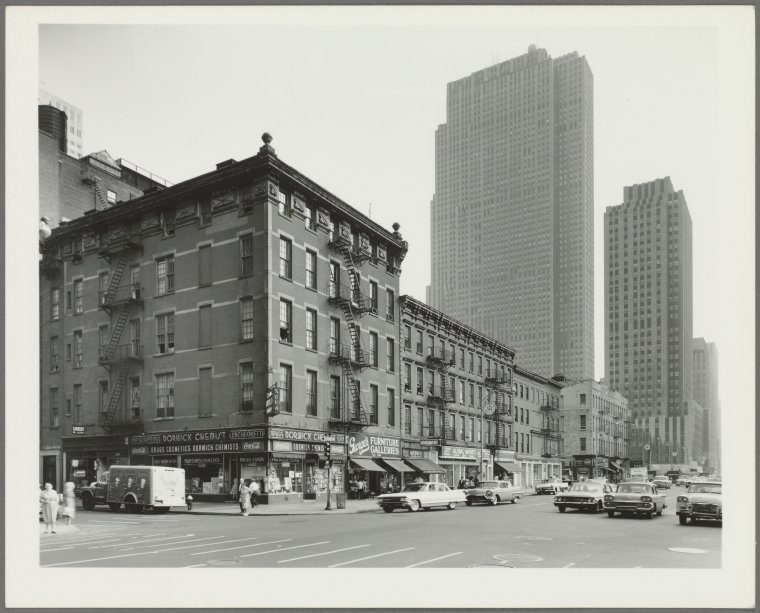 In 1963 alone, 10,000 new litter baskets found their way onto street corners. 2"10,000 New Litter Baskets" New York Amsterdam News (New York City), May 4, 1963 ProQuest Historical Newspapers, 30.The effort to pick up these fill baskets was enormous: on a daily collection route, a sanitation worker "expends energy equivalent to that used by a person climbing the empire state building with a 35lb pack on his back."3"Sani-Facts." SWEEP, Winter 1959.The Department of Sanitation, City of New York. (New York City), 16.

The litter baskets were painted dark green, opposite from their original white. Chartreuse were suggested, the color was deemed too bright. 4SWEEP, Summer 1966. The Department of Sanitation, City of New York. (New York City), 20.
In fact, most of DSNY's machinery on the streets changed to fade into the background. "Noisy" yellow paint was replaced by white on sanitation trucks and signs, the signs of sanitation taking a backseat to other visible aspects of the street.5Sanitation Department Changes Aspect of the Sprinkler Tracks but... New York Times (New York City), August 8 1967. 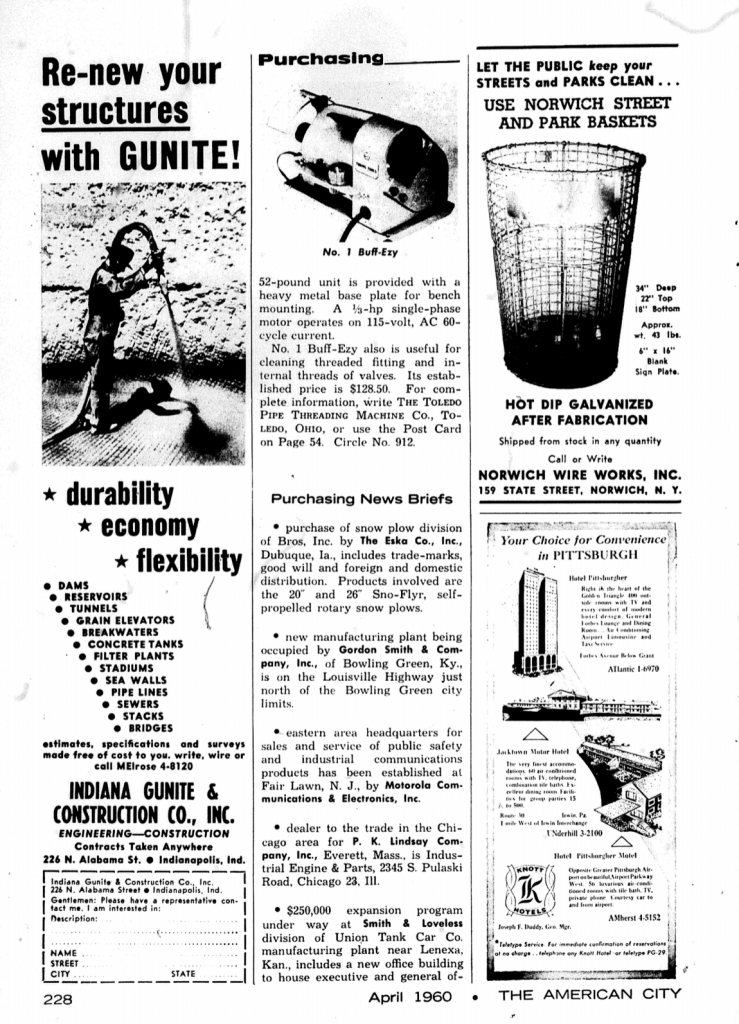 Litter basket design never merited enough appeal to be featured in design or urban planning magazines, but the various industrial manufacturers knew how to sell through the qualities of a good litter basket, focusing on durable material, size, and weight.
New York City litter baskets during the 1960s resembled the Norwich Wire Works baskets, with metal sign plates and the metal ring at the bottom of the basket.

Scroll down the page to see more advertisements for litter baskets. 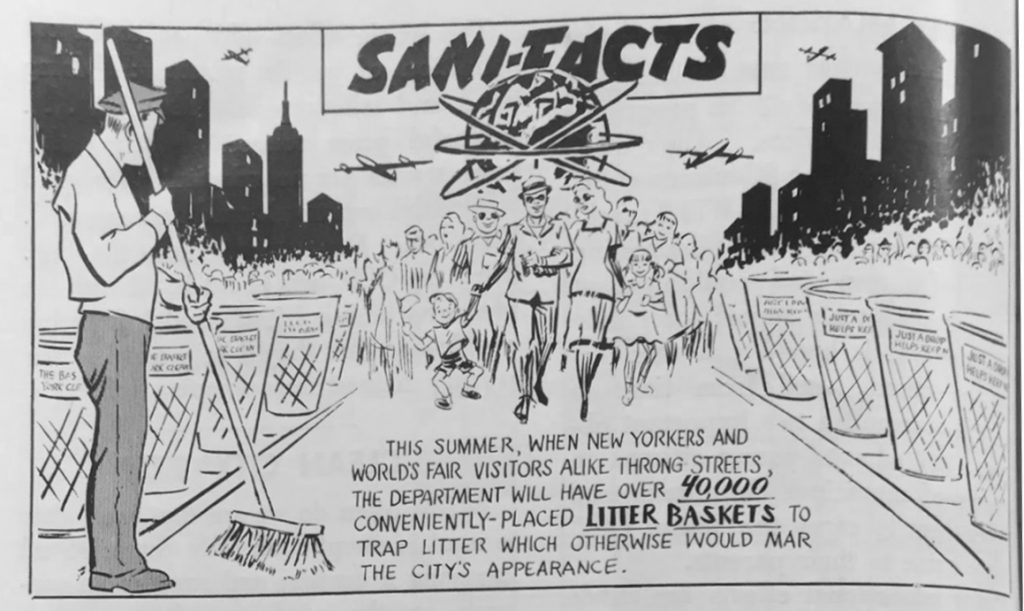 Made by the Metro Bottle Co., Rose-X was a Sodium Hypochlorite Solution that was used in liquid laundry starch at the Roselux Chemical Company in Brooklyn. Patented in the 1950s, the bottles were frequently used in the 1960s and can now be collector's items, or "mungo."

See the definition of mungo below: 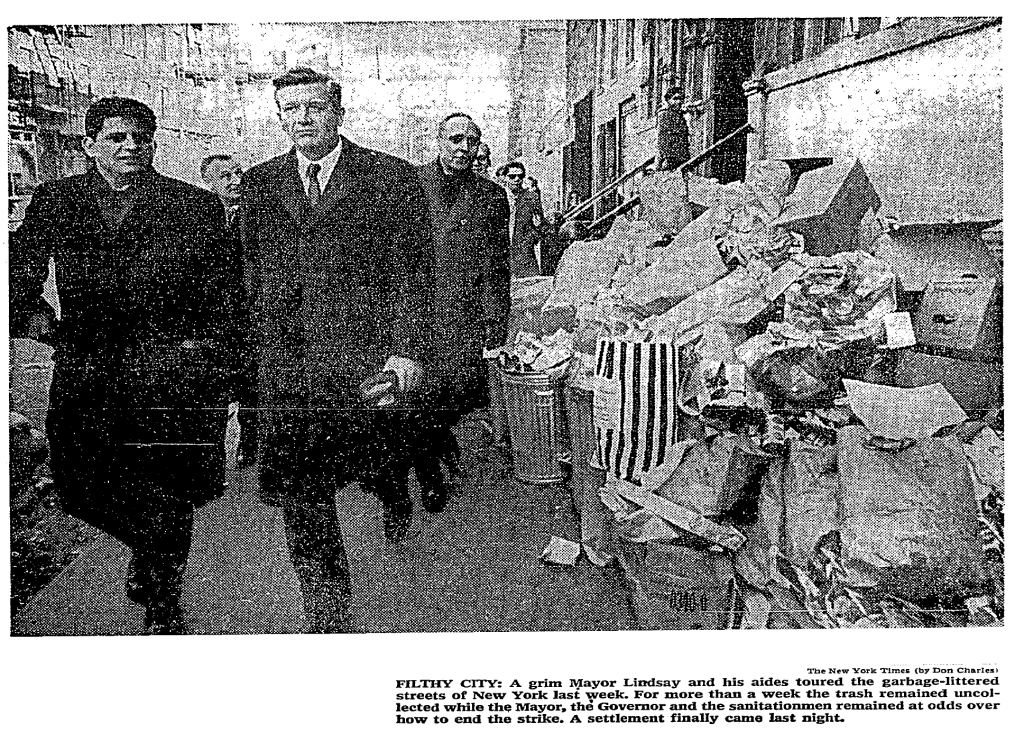 Mayor John Lindsay clashed with the Sanitation Men Association, accusing the workers to be unlawful and too demanding, and went as far as asking Governor Rockefeller to call in the national guard to control the sanitation workers. Governor John D. Rockefeller simply took control of negotiations, coming to terms with DSNY (without the Mayor’s consent), and meeting the demands for fair pay, pensions and contracts.

Listen to the statement here. 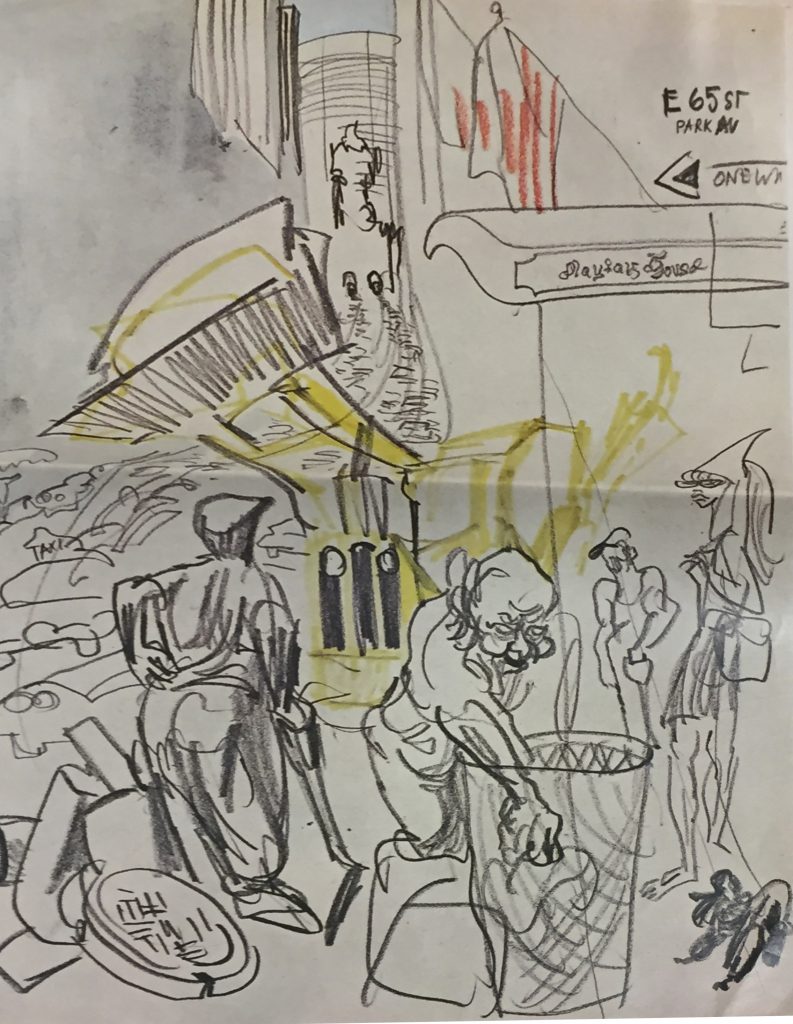 Richard J. Whalen, a journalist and historian of New York City politics, wrote a devastating article in FORTUNE magazine in 1964.
He claimed a perspective of watching the "failure" of New York from an "angry view from the streets," as the city continued to be "without grace," "humorless," the people within "dehumanized," because of how dirty the city appeared to be.
The despair that seeped throughout the article caught the notice of municipal officials, and the article was collected with other articles about the aesthetic
conditions of the city.
Though clearly the ugliness of the city was a concern, the causes behind these surfaces never rose in Whalen's article. 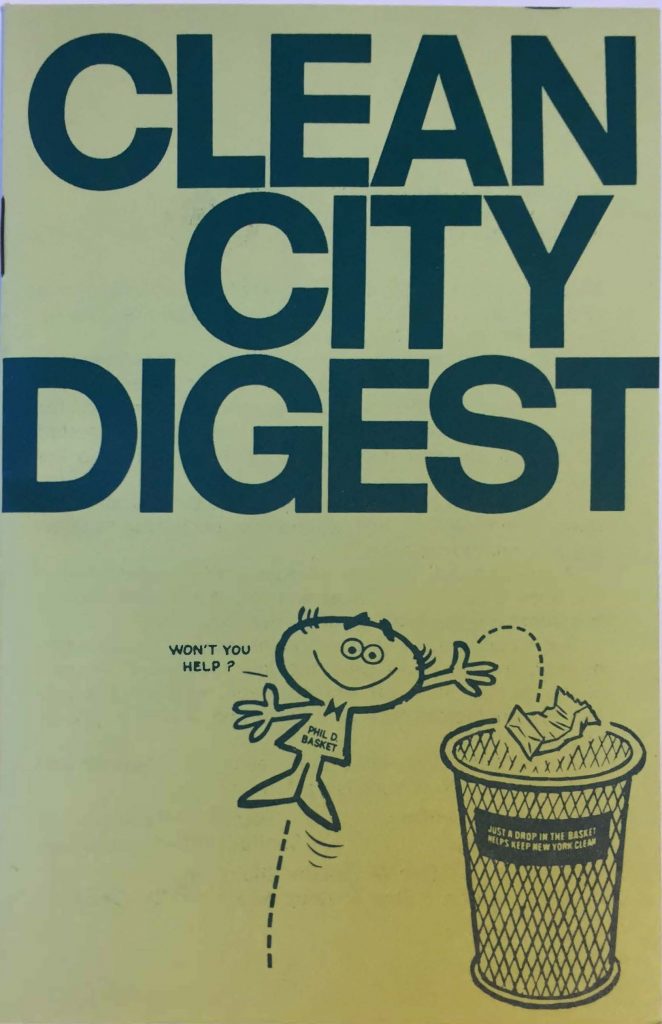 This "Clean City Digest" was passed out to New Yorkers to further clarify New York Sanitary Codes.
It and litter baskets began to tell users to not put any household or commercial litter inside.

Click on the page to read the whole digest. 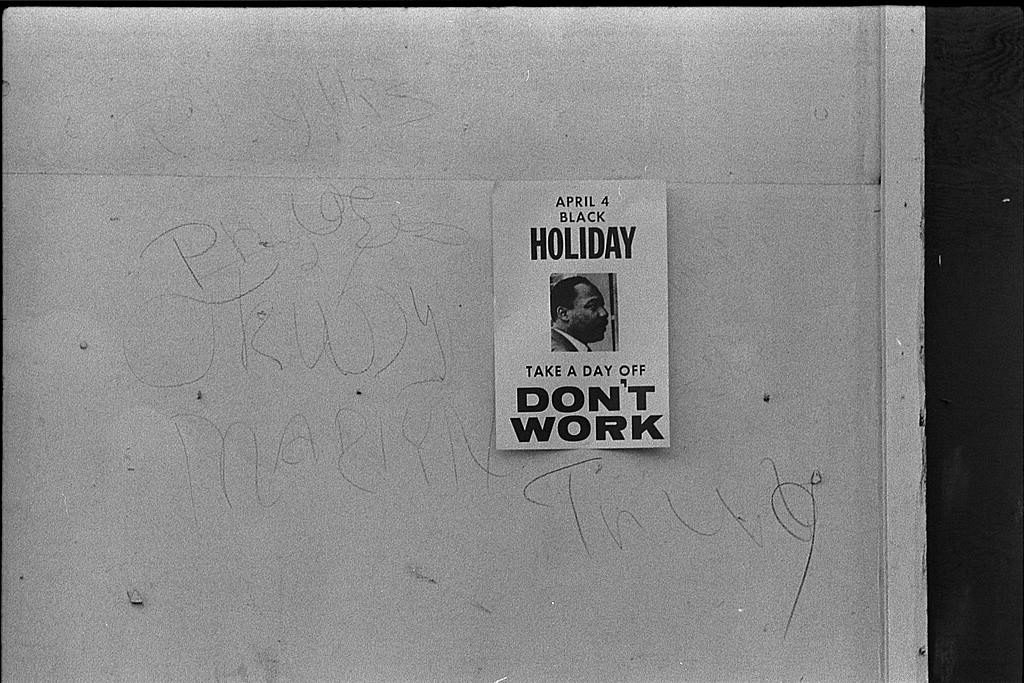 Posters such as this one were vital in protests for spreading the word. Dr. Martin Luther King's last sermon at Mason Temple in Memphis, Tennessee was in support of the Memphis Sanitation Men, on strike because of the death of two African-American Sanitation workers. Several members of the New York City Department of Sanitation also went down to Memphis to support their fellow sanitation workers.6Martin Luther King, Jr. "I've Been to the Mountaintop." Blackpast.org.

A Voice of Cleanliness 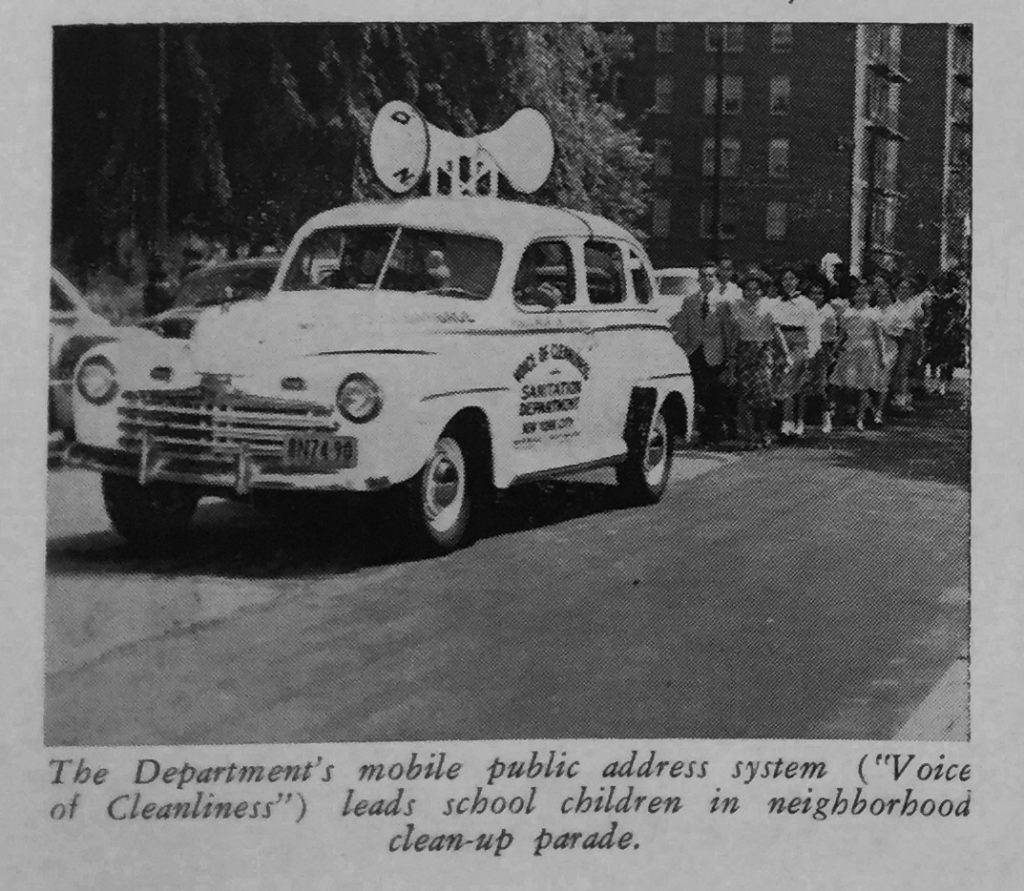 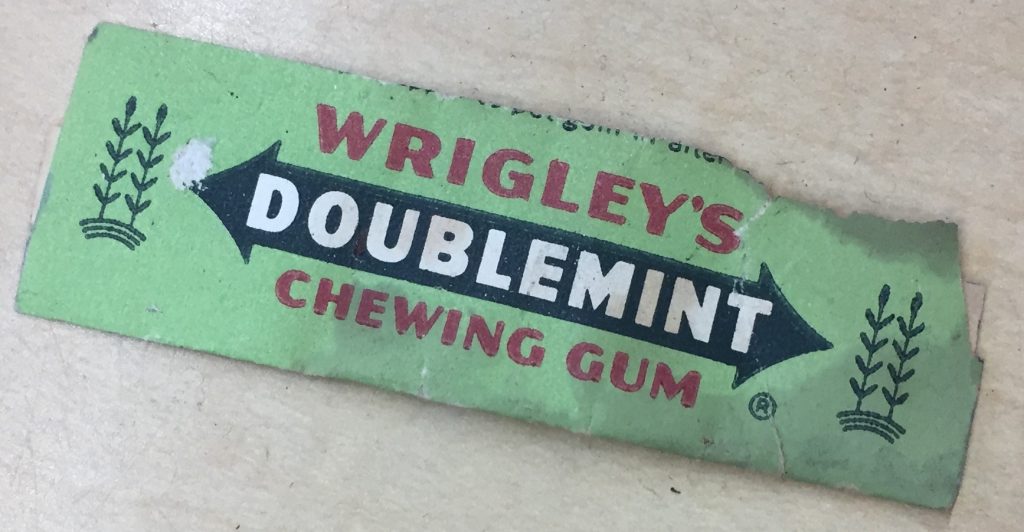 How to Handle Litterbugs 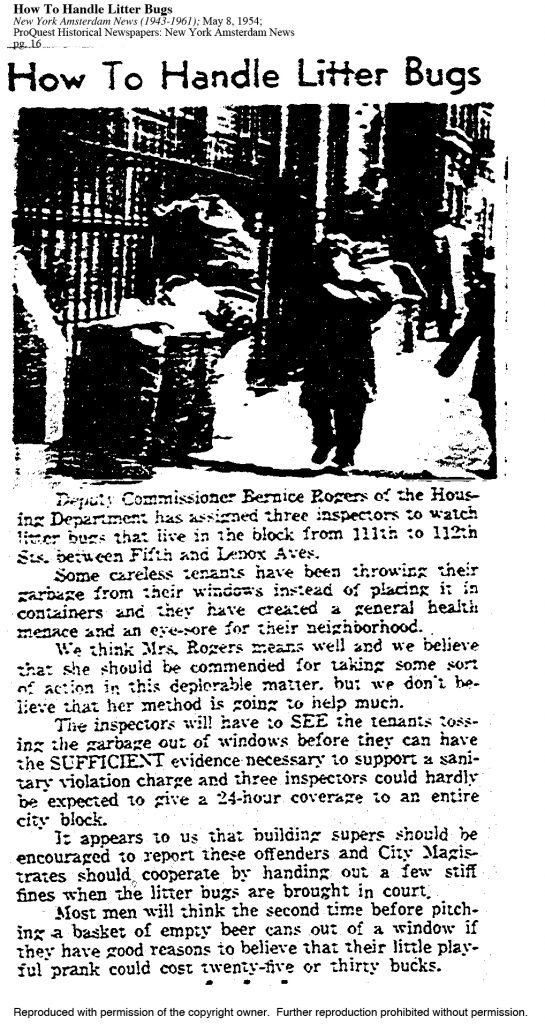 Amsterdam News, the oldest Black newspaper in the country, reported on the litterbug campaigns with a note of skepticism, rightly cautious of a system that depends on subjective ideals of cleanliness. 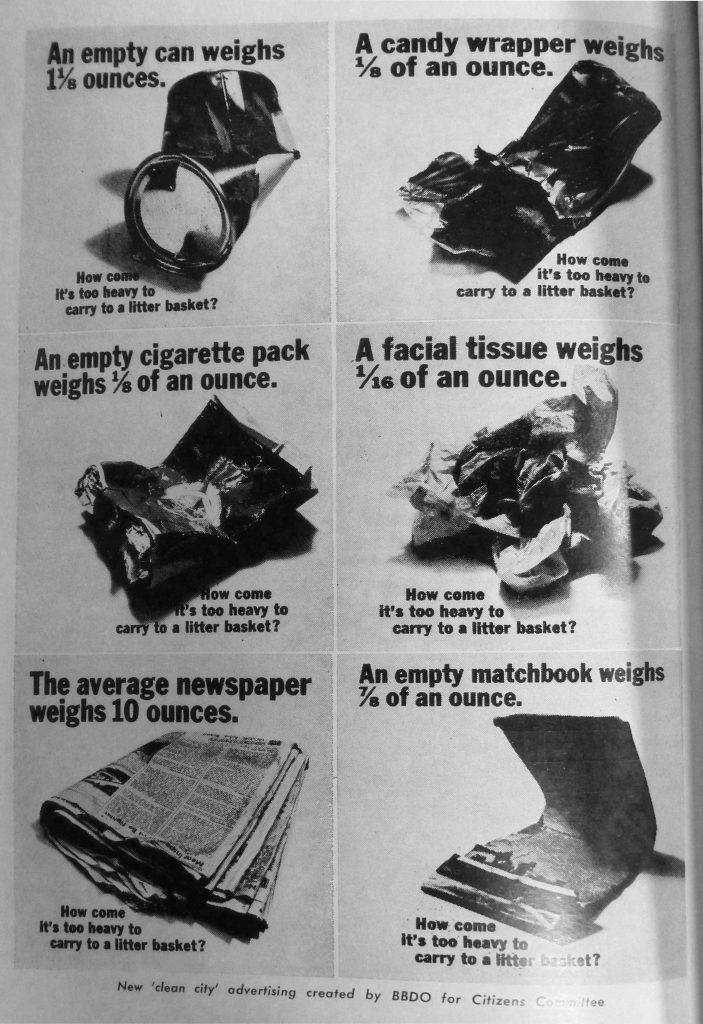 New disposable items for individual aimed cleanliness, added to the dirtiness of the city by creating more waste. 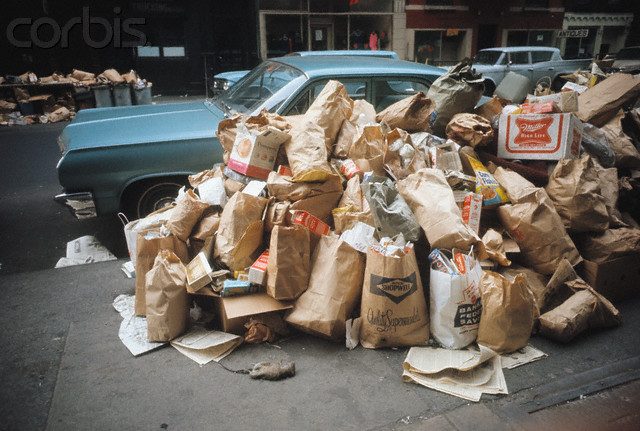 On February 2, 1968, the Department of Sanitation stopped collecting trash from the streets of New York after Mayor
Lindsay would not negotiate fair labor rights. The strike went on for 9 days. See other images of the street during the Strike here and here, or watch the news clip below.